Bang on! The Old Gunpowder Store launches in Edinburgh! 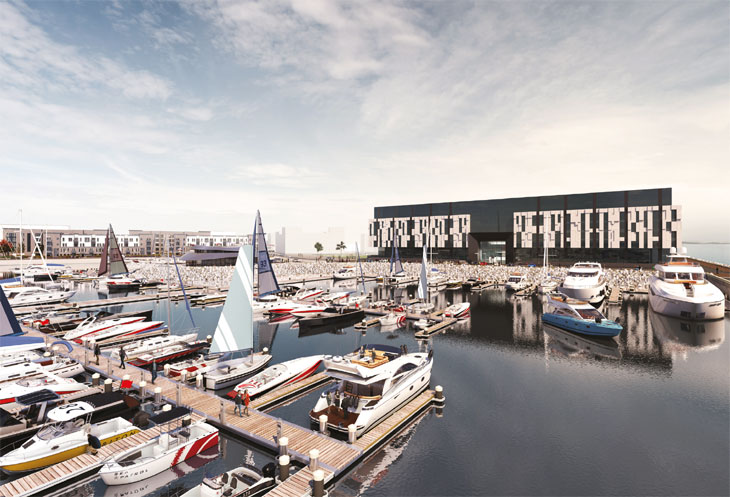 Knight Frank has been appointed as the Sales Agent for the scheme, in conjunction with DJ Alexander – the largest letting agency in Edinburgh.

Neil Scott, Partner at Knight Frank said, “We are delighted to be appointed as sales agent for what is arguably Edinburgh’s most exciting new waterside location. Royal Wharf has an unrivalled level of specification and amenities which will appeal to this increasingly important market segment.”

Melinda Illes, Head of New Business for DJ Alexander added, “The regeneration of Granton Harbour is a really exciting prospect for Edinburgh and the whole Granton area. With ever growing demand for rental properties across the Scottish capital, the investment potential is huge for these residential properties. We are confident that this part of the city will become a real destination and we are delighted to be contributing to the legacy of Edinburgh Marina.”

Land agent Aston Mead has thrown its full support behind the winning idea in this year’s £50,000 Richard Koch Breakthrough Prize from the Institute of Economic Affairs (IEA).

The prize, supported by entrepreneur Richard Koch, sought the best and boldest entry outlining a ‘free market breakthrough’ policy to solve the UK housing crisis. It was judged by a panel including Jacob Rees-Mogg MP, Richard Koch and Mark Littlewood, Director General at the IEA.

The winning entry proposes the ‘Land Purchase Act’ – a market-based policy that centres on how swathes of public land can be made available for people to build homes according to their own choice and preference. The essay argues that the shortage of affordable housing in the UK has been caused by strict and outdated planning laws.

It makes the case for releasing surplus or underused public land to help people onto the housing ladder.

Such a move could deliver as many as two million new homes, the majority of which would be built in areas where there is high demand for housing.

Aston Mead Land & Planning Director Charles Hesse said, “This is exactly the sort of original, dynamic and creative thinking that is needed to solve the country’s housing crisis.”

Under the proposal, the government would enter into a contract with the occupier, who would take out a mortgage to cover the cost of building the property on the land. The occupier would decide on the style of house to be built and given a choice over the timescale and structure in which they gradually acquire private ownership. There would also be reduced planning restrictions.

Jacob Rees-Mogg, MP, said, “A free market solution to the housing shortage would reinvigorate our home owning democracy. It is the most important political challenge once Brexit is concluded.”

Call in to the Telegraph Works 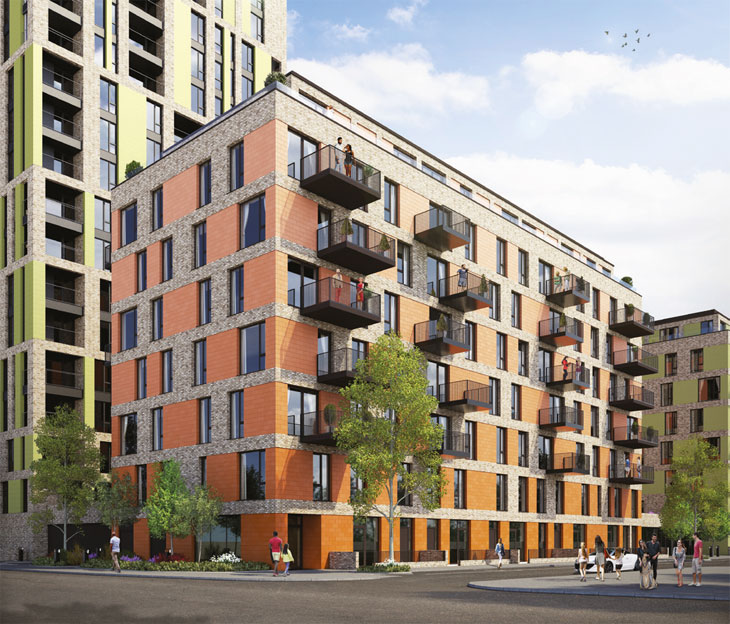 The striking development comprises one, two and three-bedroom apartments, all available through Shared Ownership. Prices start from £105,300 for a 30 per cent share of a one bedroom apartment.

Telegraph Works is a well-served development for connectivity, North Greenwich tube station, the nearest station for all major connections, is just seven minute bike ride away from the development. Shopping on Bond Street or the bright lights of the West End is just 17 minutes away on the Jubilee Line. Residents can reach Canary Wharf in just eight minutes via the Jubilee Line, whilst London Bridge is a swift nine minutes away. The area boasts further connectivity with its DLR services, with Greenwich DLR station just an eight minute cycle away from the development. For those commuting into the City, Bank is just 22 minute train ride away via the DRL.

Andrew Peglau, Head of Marketing at Peabody said, “Telegraph Works is a striking new development that has lots to offer young professionals and families. Its historic location and glorious green spaces will give residents that high quality London lifestyle they are seeking, at an attainable price.” 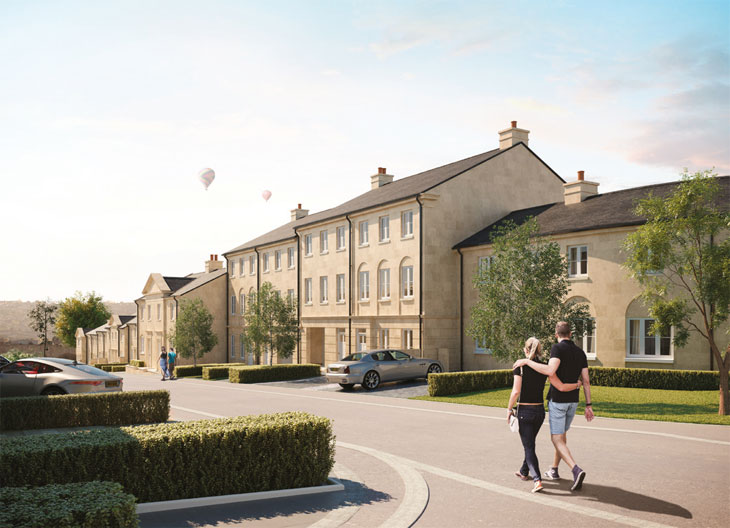 Bath’s Holburne Park has launched a new four bedroomed show home to mark the end of phase one development of Holburne Park.

Francis Firmstone, Director of Hardrock Developments Ltd, said, “With only a handful of homes remaining now is the perfect time to visit Holburne Park and see this new neighbourhood in Bath.”

Vicky Dudbridge, Director at Savills, the marketing agents said, “This is a chance for visitors to get a feel for the scale of this beautiful development and walk the new neighbourhood in addition to envisioning themselves living here by walking between the three remaining properties. It is also a chance to experience the beautiful setting of the development – with no appointment necessary, it’s really easy to just pop along and take a look!”

This is a chance for visitors to get a feel for the scale of the beautiful setting of the development.

Set in a hillside location off Warminster Road and offering expansive views over the surrounding Charlcombe Valley the homes are a short stroll from the picturesque Kennet and Avon canal.

When complete, Holburne Park will provide over 200 new homes for Bath, from one bedroom apartments to six bedroom detached villas on the open market, together with 81 affordable homes. 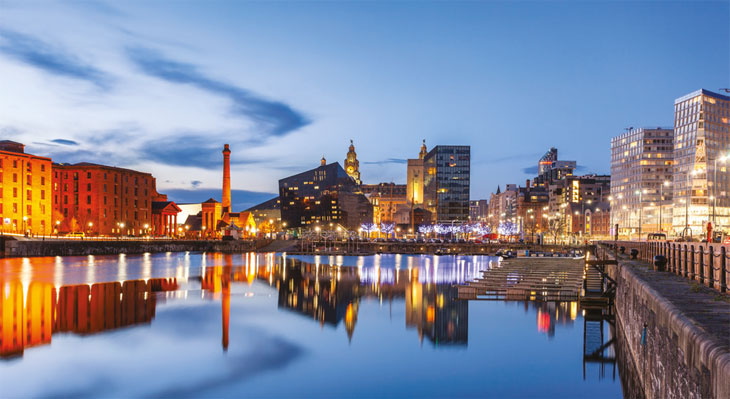 Liverpool is leading the UK’s cities in terms of its house price growth, achieving inflation of 7.5 per cent in the year to August 2018, according to the Hometrack UK Cities House Price Index – a larger increase than any other city in the country.

Jonathan Stephens, MD, Surrenden Invest, says, “Those working in the Liverpool property sector will immediately appreciate why the city is leading the UK. It has exceptionally strong credentials as a property investment destination. The thriving business community is leading to a city centre population boom – as is the case in many cities across the country, with people flocking to live close to cultural attractions, restaurants and retail outlets, as well as their places of employment.”

This demand for city centre living means that well located homes to rent are enjoying a sustained boom. This is excellent news for property investors as the market fundamentals that are driving the boom will remain the same irrespective of whether or not the UK is a member of the EU. Healthy yields and solid potential for capital growth are a tempting combination for any investor.

Liverpool’s international appeal has also been flagged up by IBM. The company’s annual Global Location Trends report placed the Liverpool-Manchester metropolitan area in the top ten locations globally for foreign direct investment. The area pulled in the tenth highest number of projects in 2017, resulting in the creation of 7,000 jobs for local workers.

Gateway to the Trossachs 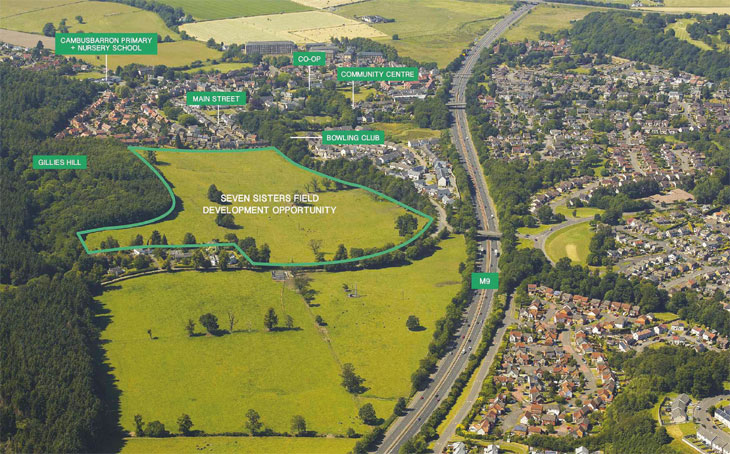 250 new, high quality homes will be delivered in Cambusbarron near Stirling, as planning permission has been granted in principle for residential development.

The 33 acres site, known as Seven Sisters, offers prime residential land and has been launched to the market by CEG and Hallam Land Management Ltd. JLL is marketing the site on behalf of CEG and Hallam and is expecting a high level of interest from housebuilders, particularly given the rarity of development land in this sought-after area.

David Hodgson, head of strategic development north at CEG, said, “We have been looking at a number of opportunities to bring forward new housing developments across Scotland and this Stirlingshire site offers the ability to not only deliver much-needed new homes and benefit the local economy, but to also create a distinctive neighbourhood with exceptional views across the Carse valley to Stirling Castle.”

The development is contributing £5m towards the redevelopment and extension of nearby Cambusbarron Primary School – within walking distance of the site. Seven secondary schools are nearby across Stirling.

Nina Stobie, Director at JLL in Glasgow said, “The sale of land in Cambusbarron is a rare opportunity to develop a vibrant new neighbourhood in a beautiful part of Scotland’s central belt. Stirling has seen limited releases of residential development land in recent years. However, the city has a proven track record of residential demand, year on year population growth and is characterised by strong residential values.”

Help to Buy extended to 2023 for FTBs 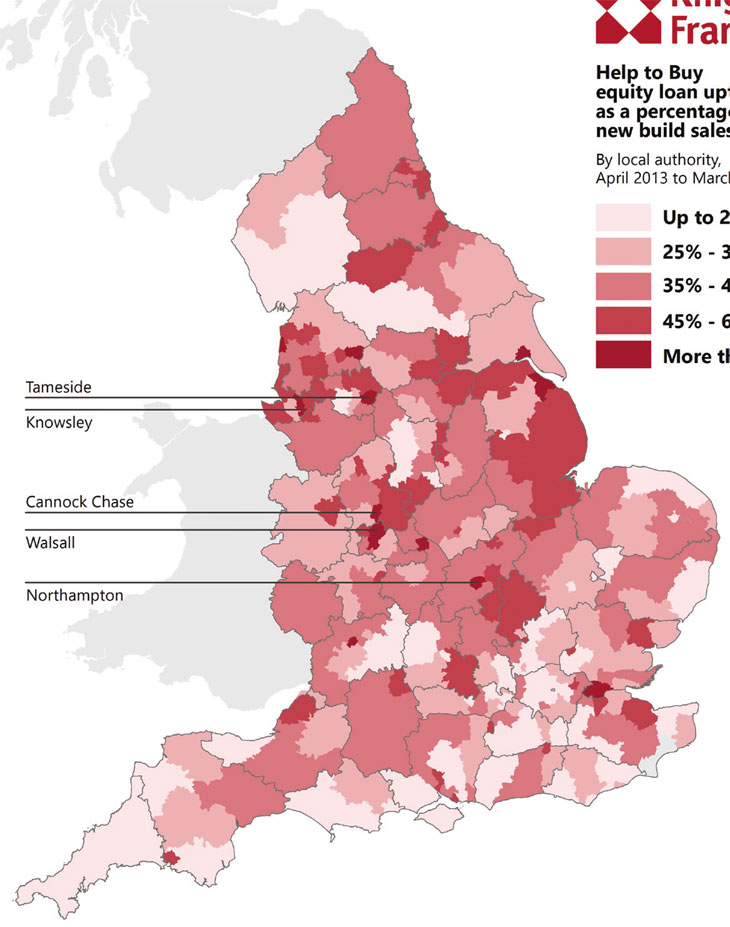 It was announced in the Chancellor of the Exchequer’s budget that the Help to Buy Equity Loan will be extended to 2023 – for first time buyers only. There will be varying capital value limits across the regions from 2021.

Justin Gaze, Head of Residential Development Land at Knight Frank said that the announcement brought some much-needed clarity on Help to Buy is positive development.

“No industry should be reliant on government assistance indefinitely, so the decision by ministers to restrict the scheme to first time buyers with regional purchase price caps is a sensible one. Some 81 per cent of equity loans since 2013 have been taken out by first-time buyers.”

“However, the ‘deposit gap’ that the Help to Buy equity loan scheme was established to overcome is still very much a problem. UK house prices are 37 per cent higher than when the scheme was introduced in 2013 and the mortgage market for those with only a five per cent deposit remains very thin. For prospective buyers, finding the funds for a deposit will remain the biggest barrier to home ownership.

“From 2023, the onus will move to mortgage lenders and the development community to help buyers to bridge this gap.”