Prices slide towards the edge…

Designs on Property tracks and summarises the monthly property indices. Kate Faulkner says, “The last quarter of the year could be tough, with a price and transaction slowdown as opposed to the cliff drop.” 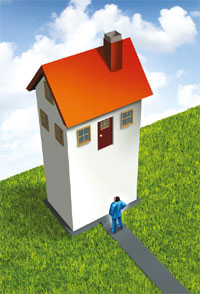 Kate says:
It’s clear from the indices and the latest media ‘chatter’ about house prices being about to fall off a cliff, that property prices continue to slow. Rightmove’s lead indicator on how sellers feel suggests that asking prices have reduced for the first time since 2009, although a ray of light comes from Nationwide and Hometrack, suggesting a slight uptick. We are seeing a natural slowdown from the recovery in the South and East, while in the rest of the UK prices have done well in the last few years. Mortgage indices may see falls with the new stringent affordability tests moving from three per cent above base to three per cent above a lender’s SVR.

Government and the BoE wanted to take the froth out of the market – but they they have stalled it altogether.

RICS: “Beneath the national trend, prices continue to slide in London, with the price growth remaining entrenched in negative territory for a fourteenth month. Away from the capital, house price inflation in East Anglia has moderated noticeably since the start of 2017, with little change reported in each of the last two months.”
LSL Acadata HPI: “In April 2017, for the third month running, the West Midlands tops the charts for regional house price growth, at 5.1 per cent, with the East of England remaining in second place, also at 5.1 per cent, and the East Midlands in third place at 4.4 per cent. Greater London has moved up one place into eighth in terms of regional price change, just ahead of Yorkshire and the Humber at 2.7 per cent. The North East remains in bottom place, with 0.2 per cent growth.”
Hometrack: “Half of our cities have faster growth than a year ago. Cities in southeast England have recorded the greatest slowdown over the year – London 13 per cent to 3 per cent, Cambridge 13 per cent to two per cent.”

Kate says: Scotland and Wales are seeing the first signs of positive growth since the highs of 2007/8 which were swiftly followed by dramatic falls. This is good news, albeit may be short lived if the ‘bad property market news’ and uncertainty around Brexit continues. Higher affordability requirements may cause further stagnation, making it difficult for second and third steppers to move.

Regionally, for the first time since the recovery, we are seeing year on year performance for all areas, bar the East, below its longterm average – including London – running at nearly half its normal growth levels. However, Hometrack says, “the annual growth rate in London (3.3 per cent) is at the lowest for five years, but with signs of ‘bottoming out’. We do not expect the London City index to go negative year on year in 2017.”

It’s interesting to see from the Hometrack index that although some cities such as Nottingham and Manchester are seeing some good growth, this is nothing like the levels seen in the South/London and such rapid rises are unlikely to be able to be supported while the economy falters and uncertainty reigns – and of course the media go back to digging up their knowledge of property crash reports!

Most commentary focuses on what is happening to property prices, but as anyone in the property industry knows, property prices are driven by what happens to supply and demand, which is why performance is so localised, pretty much to a property on a street.
LSL Acadata HPI: “The number of housing transactions in May 2017 in England & Wales is estimated at 62,500, based on the Land Registry numbers and methodology of accounting for domestic property sales. This is up by six per cent on April’s total, which is a marginally smaller rise than the typical seasonal increase of 10 per cent that occurs in May, as based on data from the last 20 years.”
naea | propertymark: “The number of sales agreed per branch rose from eight in April to 10 in May, which was the same level seen in March. 26 per cent of properties sold in May were to FTBs, a rise of one percentage point from April.”
Lloyds Bank: “Property sales in 2016 were 7 per cent lower than in 2015. There were 848,857 home sales in England & Wales in 2016, compared to 915,096 in the previous year. All regions saw a decrease in sales in 2016 compared to 2015, with the largest falls in Greater London (-20,660 sales, -18 per cent) and the South East (-23,422 sales, -10 per cent). Both East and West Midlands fared the best with just a one per cent decline, followed by North West (-2 per cent).

“Despite the recent dip in home sales, there has been an improvement compared to five years ago when the market started to recover from the financial crisis. The number of sales in England & Wales as a whole increased by 29 per cent (188,386 sales) from 2011-2016 with the majority of regions seeing increases of between 23 per cent (South East) and 46 per cent (North West). The exception – and the worst performer by some distance – was Greater London with a rise of just two per cent in the past five years”.
Bank of England: “Mortgage approvals for house purchase were broadly stable at 65,202, while approvals for remortgaging increased slightly to 42,955.”
BBA: “House purchase approval numbers in May of 40,347 were 3.3 per cent lower than May 2016 and slightly down on the monthly average of 41,923 over the previous six months.”

Kate says:
“With property prices stalling, a lack of new buy to let investors and the ‘buying forward’ that took place in Q1 2016, transactions continue to falter both for agents and indeed for the mortgage business. There are now increasing calls to reverse the mortgage interest relief changes hitting BTL. Whether this will happen politically is questionable, landlords (and agents) are still being seen as a ‘problem’ to the PRS as opposed to a solution and with all political parties wanting to curb BTL demand, it’s unlikely with such a small majority it would get through.

“The difficulty is that the buoyant first time buyer market may be hit over the coming months with the increased affordability checks, this, with the reduction in BTL investment and a slowing and in some cases reversal of real wages, the government and Bank of England may be seen to have ‘gone too far’ and rather than take the ‘froth’ out of the property market, they may have stalled it altogether and even send it into reverse. This won’t do anything to help the economy, nor will it help to continue the boost to new house building. It’s likely the last quarter of the year will be a tough one for agents, but this is likely to be a slowdown in prices and transactions as opposed to the cliff drop many suggest. The latter will require a severe external economic shock in my view.”

RICS: “A sheer lack of supply continues to support prices and the sustained deterioration in new sales instructions over the past two years shows no sign of abating. During May, 25 per cent more respondents cited a decline in fresh listings (compared to those noting an increase), producing the most negative reading since July 2016. Although a fall in new instructions is a recurring theme, anecdotal evidence suggests this month’s drop may have been exacerbated by the General Election, as some vendors adopt a wait and see approach. Consequently, stock levels remain stuck at all-time lows with the average number of unsold homes on estate agents’ books at 43.

“Alongside this, new buyer enquiries fell modestly at the national level, having remained stagnant over much of the past six months. As with new vendors, a large portion of contributors suspect the General Election is having an adverse impact on demand, although some appear more sanguine about the effect. At the same time, agreed sales continued to decline for a second month running as the national indicator returned a net balance of -8 per cent (compared to -9 per cent previously). Despite the slight drop in sales, the average time taken to complete a transaction held steady at 16 weeks in May.”

Kate says:
A crash only tends to occur when demand plummets in comparison to supply. In areas where supply is plentiful and economic performance is poor/OK, we aren’t seeing huge house price increases. In London, although demand has fallen, a crash so far has been avoided as there is still a demand versus supply issue in many areas, which is putting a ‘floor’ on the level prices can fall.