Rightmove has sent out a reminder to agents reiterating the 14-week rule it introduced in December last year to combat portal juggling by sales agents. 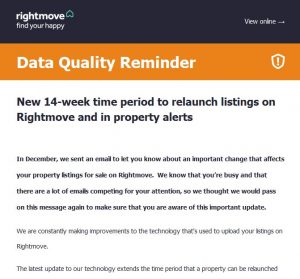 It highlights how properties that are re-listed during the 14-week period will not change their date or be sent out in property alerts.

Rightmove now has what it calls a ‘growing team’ of tech experts and new software trawling its listing for errant listings, and also recently held a meeting with leading anti-portal juggling campaigner and former Jupix boss Robert May, who has built a software suite that can spot errant agents when they ‘play’ the listings game.

“When you’ve got 25,000 [listings] movements a day on a portal like Rightmove then it’s always going to be a challenge for them to see what’s going on and police it,” says Robert.

He says the techniques that some surprisingly well-known names in the industry use to juggle their listings is getting ever more sophisticated, including ‘zombie listings’ when previously sold properties are re-listed as ‘SSTC’ and ‘bat out of hell’ listings where properties are listed overnight and then withdrawn in the morning.

Last year Rightmove said it removed half a million ‘out of date’ properties and fielded 2,500 calls from agents and consumers about suspect listings.

Rightmove has a strict policing system in force for other types of listings abuse. Agents are let off the first time they are caught misrepresenting their listings on the site, but if caught a second time their properties are hidden from public view until the problem is rectified.

If discovered a third time their properties are removed from Rightmove’s listings for at least 24 hours.

The site says it polices four behaviours: listing a single property several times (a form of portal juggling); not changing a property’s status in time; not removing sold or let properties; and using the ‘images’ section as a marketing platform.