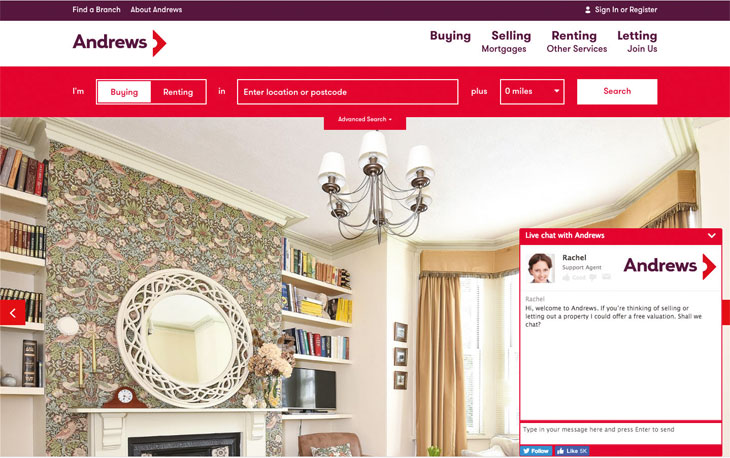 Property prices are undoubtedly a source of much discussion and disagreement among both the general population and industry experts alike, but when it comes down to it, the only thing potential home sellers really want to know is just how much their home is worth.

In the past, their first step would likely have been to get a local agent over, but with the plethora of information now available online, many are getting an initial idea of their home’s valuation online. Some agents may see this as a missed opportunity to get their foot in the door, but with a corresponding increase in the number of valuation tools available to be white labelled to agents’ websites, others are quickly realising the digital trend can work in their favour by giving them a better shot at positioning themselves as one of the three agents a homeowner will typically invite to give a face-to-face valuation of their home.

There is a whole range of valuation tools available to agents these days, but typically they use similar data – predominantly Land Registry data – to provide instant online valuations to potential vendors. There are also some that use completely different metrics, however, for example Webdadi, which uses an agent’s own database (with the potential to add theoretical examples) to value properties.

Depending on the provider, there are added data points and other bells and whistles, for example, MyVal will tell clients and agents if a property has a current EPC.

Homeflow’s valuation tool shows vendors a series of similar properties and asks them to select those that most closely resemble their own, an additional step designed to both refine the accuracy of the valuation and also make the user complicit in the process. EAanalytics’ Roboval tool conducts the valuation via a chatbot and also asks users what they think of the valuation to give agents more information to help them pitch the vendor. Many providers will also allow agents to systemically up or down value the standard valuation by a certain percentage.

Online property valuation tools, while appealing and engaging due to their ability to give immediate responses, can create unrealistic expectations. Alex Bourne, Beauchamp Estates.

However, despite the increasing number of options now available, some agents remain sceptical. Alex Bourne, Director at Beauchamp Estates in Marylebone, says, “Online property valuation tools, while in some ways appealing and engaging due to their ability to give immediate responses, can create unrealistic expectations in both buyers and vendors.

“While some properties may more readily be assessed on a purely computational basis: square footage, location, position, number of bedrooms, etc. this will still fail to take into account such aspects as condition, view or other specific aspects of a property, leading to potentially false expectations.

“Beauchamp Estates does not deploy such tools, preferring instead to talk to clients and view property, when we may also be able to offer further advice in preparing the property for sale.”

It is a first point of contact with a potential new client and we follow up each use of an online tool to ascertain how we can best engage with them. Nick Moir, Andrews Property Group.

Other agents say this type of view largely misses the point. Nick Moir, Head of Marketing at Andrews Property Group, argues, “Here at Andrews, we were an early adopter of online valuation tools. They’re not perfect, but they are getting better all the time.

“However, that’s not really the point. For us, the online tool is a first point of contact with a potential new client and we follow up each use of the online tool to ascertain how we can best engage with that person.

“Once we’re at that stage, we clearly explain that the value shown may not be accurate for the simple reason that it hasn’t involved genuine human insight and that, instead, it’s our local branch teams at the coal face, day in and day out, who’ll be best placed to move that enquiry forward.”

Valuation tools are not designed to be 100 per cent accurate, says Homeflow Director Jeremy Tapp. Rather, they are designed to generate leads for agents. “Obviously a human is going to be more accurate than a machine but the point is a human needs to be able to get in the room to give that accurate assessment and these tools increase your chance of getting in the living room in the first place.”

The big question for agents considering whether or not to fork out the between £20 and £100 per month the valuation tool providers typically charge – with newer entrants generally charging less than their more established competitors – is how much extra business is it going to get them?

“We think it tends to squeeze about seven per cent incremental increase out of a website,” says Tapp. “In all cases when you put a valuation tool on a website it does lift the conversion rate. It doesn’t matter which tool you are using.”

Chris Kyriacou, founder of EAanalytics, which partners with third parties to provide form-based tools to its clients as well as providing its Roboval tool, says about 20 per cent of users complete the process and leave their contact details. “From what we’ve seen over time it is about an 80 per cent drop-off on the form-based tools. So where they are presented with a form that says ‘put your name in here, put your email address in here’ you get about 20 per cent go through.”

Agents using the tools are largely positive about their experience. “We’re now at the point where one in every five uses of the online tool converts to an actual valuation appointment – given that a lot of users are simply being nosey with regards to the value of not only their property, but also that of their friends and neighbours, we think that’s a positive conversion rate and it’s ultimately where the value in the valuation tool lies,” says Moir.

It is so successful for us because we make sure it’s marketed in the right way across social media, etc., as well as in advertisements on the property portals. Graham Cook, Proctors.

Graham Cook, partner at Proctors’ Anerley office, is similarly pleased with the results. “Since the end of 2016 we introduced an online valuation tool to our website giving prospective customers a quick way to find out an estimate of what their property is worth. This has proven very positive for both our business and for customers, especially for sellers who might feel apprehensive about contacting an estate agent in the first instance or don’t have the time for an initial face-to-face valuation.

“We usually get around two-three valuations a day, which quickly mounts up over a month, and from this we have the leads to contact and offer a more thorough face-to-face valuation.”

However, Graham Cook adds, “One of the reasons why this service is proving successful for us as a business is because we make sure the tool is marketed in the right way across social media, door-to-door marketing as well as advertisements on property portals such as Rightmove.”

Oliver Chapple, CEO at Webdadi, adds that the positioning of the tool on an agent’s site is also very important. “The prime real estate is your home page and it’s above the fold. Anything above the fold has the highest value in terms of real estate because that is your core landing page, the first thing you see. So if you are going to put in an instant valuation button you want it as one of your top line buttons, ideally positioned next to a person, because the eye is naturally drawn to read from left to right and be drawn to any face. Make sure it is above the fold in a natural place for people to click.”

Michelle Meah, Director at Virtual Val, says there are also other important ways of marketing the tool digitally. “It is all dependent on how you market it. There are clever ways that you can be creative. Email footers are an example, the amount of emails that agents are sending out on a daily basis is large. We provide them with an email footer that they can include their instant valuation tool on. There are also newsletters they have for people who are registering their details with them so we provide banners for newsletters. This is a great way of just getting out that there is an instant valuation tool available.”

Although also endorsing the value of web traffic and digital marketing, MyVal’s Anthony Quirk says agents shouldn’t forget about more traditional ways of marketing their valuation tools. “We had a customer the other day who did a small leaflet drop to say that she has now got a valuation tool on her website. Over the weekend she had four people use it and three of those have actually asked her to go round for a face to face valuation,” he explains.

It you promote them correctly, it seems valuation tools can be a good way for agents to make sure they are in the forefront of local vendors’ minds when it comes to choosing someone to first value and later market their home for sale. And with new providers springing up on a regular basis, it shouldn’t be too hard to find one that provides everything you’re looking for at a reasonable price.