Sign in or Sign up
The essential site for residential agents
Home » Features » 2019: signs are good!
previous next
Marketing

Signboards, magazines, flyers and business cards. These methods of traditional marketing are still being ordered every day – even in this digital age. Lisa Isaacs spoke to industry suppliers to find out why. 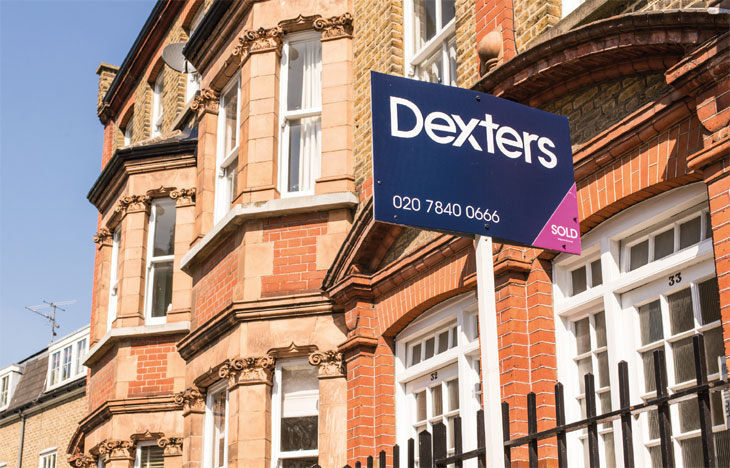 What is it about tangible, traditional marketing that means it’s still an agent’s go-to promotional method? There are so many positive factors, from the ‘leave behind’ element and the ability to geo- target specific households to being able to upscale the message by simply printing on heavier paper stock and skirting round GDPR rules. If you’re looking for lasting brand visibility and a tool to cut through the digital noise, traditional marketing is your man.

A WIN ON THE WAY TO THE BIN?

Direct mail is a marketing stalwart but is there still value in door drops? Of course there is, especially when mail can be targeted according to locality, demographic, market activity and even to hit specific audiences, such as landlords or investors. But if your head drops at the thought of your flyers and letters only making it as far as the recycling bin, you’re taking the wrong approach. 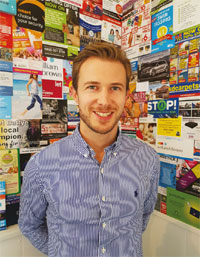 Andrew Robinson, Managing Director at Mr Flyer, says the perceived negative is a positive: “If the recipient picks up your flyer with the intention to take it directly to the bin; it’s the journey to the bin which is your ‘opportunity time’,” says Andrew. “If the flyer has an eye catching image with a relevant and intriguing headline, then there’s a good chance the receiver will put your flyer to one side, although follow-up distribution is vital to remind and elicit action. Thankfully estate agents do grasp the benefit of drip effect marketing more than any other I deal with.”

If the recipient takes your flyer to the bin, the journey to the bin is ‘opportunity time’ – so make sure it has a great image and an intriguing headline. Andrew Robinson, Mr Flyer.

Mr Flyer’s combined consultation, design, print and distribution service yields thousands of property-focused paper products so Andrew knows first-hand what performs well. “The invitation technique is still proving effective. It works particularly well on a 300gsm DL as it looks and feels like an invite, and it also represents a sizeable print saving against A5. Otherwise, good questions as headlines are effective, such as ‘how much could your house be worth?’ backed up with a free valuation call-to-action. This puts intrigue into the receiver’s mind. Sometimes the gift marketing strategy can also be effective, such as a free M&S voucher with every valuation booked but there must be an expiry date so a sense of urgency is created.”

Gary Howard, Precision Marketing’s Chief Digital Officer, says trust and credibility are two other key points that keep print in favour. “Anyone can send an email but it takes thought and preparation to send printed communication.” Gary points to statistics from MarketReach that says 87 per cent of people who receive mail rate it as believable, compared to 48 per cent for email, and 70 per cent think better of the company that sent it. Couple this with the claim that mail has the physical power to drive a digital response from 70 per cent of customers, and something posted through a letterbox has the ability to shape a brand and generate leads.

We lean heavily on technology and automation to provide a posted letter in an envelope, including the cost of the data, for less than a first class stamp. Gary Howard, Precision Marketing.

Traditional marketing is an area that has successfully fused with digital advances to offer agents better accuracy but with the retention of a physical product, Gary points out. The precision element of his marketing proposition is highly profile direct mail, “We buy five million lines of named data per year and in doing so can offer named, profiled data at affordable rates. We lean heavily on technology and automation to enable us to provide a posted letter in an envelope, including the cost of the data, for less than a first class stamp.”

Further print/digital collaborations are happening right now, with NFC (near field communication) paper being produced. This works in tandem with NFC readers on smart devices which, unlike QR codes, don’t need an app installed to read them. Simply print your flyers, business cards or brochure on to a special kind of paper with inbuilt circuitry and a user’s screen is immediately directed to a pre-programmed web page when it comes in close proximity with the chip. “This will bridge the gap between the physical and the digital, and instantly report where, when, what and who contact has been made with as huge amounts of data can be gathered via associated analytics platforms,” adds Gary.

In a throwaway society, nothing is more transient than digital communication. They may feel outdated but physical products are a way for estate agents to become more memorable and enhance their professional credentials. 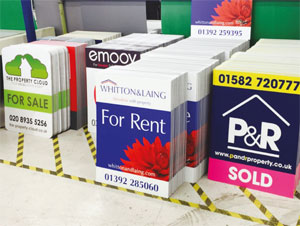 Print is still a critical element of your property marketing.

Lucinda Perks, the Business Director at Woodblock, oversees the production of personalised paper products for the property industry, including business cards, notebooks and diaries. She says in a digital age the personal touch goes a long way and believes branded materials create the chance to reflect the professionalism, ethos and style of an estate agency – an aspect that is not always possible with emails.

“Promotional products are essential in ensuring your agency remains at the forefront of your customers’ minds. Branded or personalised gifts present a fantastic opportunity to make a real impression. The gift will undoubtedly make the receiver feel valued and they will have a stylish, functional reminder of your brand whenever they use it – and who doesn’t love smart stationery!”

Lucinda also has time for corresponding with clients in the most traditional of ways, especially when a bespoke – not boilerplate – letter accompanies printed marketing materials or branded gifts, “A letter through the door is a rare thing these days and can really set an estate agency apart from the crowd. Agents stand a greater chance of their marketing material being seen and retained when accompanied by a letter. For most people, buying a house is still their biggest purchase, and the formality and professional nature of a letter can reassure clients about their agent’s professionalism and reliability.”

Signboards are the original geo-marketing – an instant way of creating brand awareness in specific areas, with immediate impact that’s bolder than a hefty SEO campaign. “Boards drive traffic to agents’ websites and generate telephone leads for offices by displaying a contact number. Agents also know that the potential client calling after spotting a board has seen the property in the flesh, which also makes it a slightly warmer lead than an online one,” says Tom Cummuskey, Marketing Manager at sign producer, Kremer Signs. “Despite the rise in online property websites, the sheer amount of boards that we produced in 2017 suggests they are still equally as important.”

Despite the rise in online property websites, the sheer amount of boards that we produced in 2017 suggests they are still equally as important. Tom Cummuskey, Kremer Signs.

Signs are cost effective brand assets as well as outwards indicators of moving activity. Tom says boards used at an average of five sales or lets cost around £2 per property and with agents reporting board lifespan of over six years, it’s a small investment: “Once the boards are paid for, an agent has full management of the boards and they can be used time and time again.” 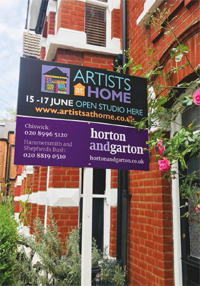 While it’s easy to get absorbed by a board’s ability to drum up buyers, Andy March, Director at Signboard, says signs also play another vital role: “An agent’s overall board presence will attract potential vendors and landlords as well as buyers and tenants, giving them an impression of the local profile of the agent’s portfolio and help embed their brand.” Andy goes on to say the all-important action of changing the slip to Sold or Let is positive proof to would-be clients that the agent in question can do the job they were instructed to do – a part of the decision-making process that’s almost impossible to replicate elsewhere.

While boards represent a most traditional marketing method, their management has shifted into the digital age to make an agent’s life easier. Ben Brookes, Director of Franchising at Agency Express, says offering clients free access to its SignMaster3 software – a board management desktop and mobile app – saves precious time. The technology seamlessly links to in-house software including Dezrez and Acquaint, and features interactive board maps, live stock control, on-site ordering and pictures of each board erected, if requested.

There is a saying in agency that’s as true now as it was 30 years ago – ‘boards breed boards’. The more boards you erect, the more homes you list. Ben Brookes, Agency Express.

“There is an old saying in agency that’s as true today as it was 30 years ago – ‘boards breed boards’. The more boards you erect, the more properties you will list and, ultimately, the more you will sell. Constant positive reinforcement is a well-documented principle and boards are a perfect medium to help an agent achieve this but the volume and placement does need careful management,” adds Ben.

Finally, a signboard isn’t just for selling houses… savvy agencies like Horton and Garton in Chiswick, make sure they’re well known in the neighbourhood by using the traditional signboard to show their support for the local community!