Claim made by Auction House founder Roger Lake as he reveals record year so far despite Brexit and other uncertainties. 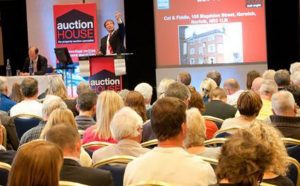 More vendors are turning from the high street to auctions to sell their homes as the UK’s high street agents struggle to find buyers in today’s “challenging selling environment”.

The claim was made by leading auctioneer Auction House as it revealed that it has sold more houses so far this year than it did at the same time last year.

“In the current climate, even to have matched last year’s number of sales would have been impressive,” says Auction House Director Roger Lake (pictured, below).

“But to have exceeded it – despite the uncertainties of Brexit, political turmoil and future trading fears – is nothing short of remarkable.”

Auction House says it has sold 2,420 lots so far this year with a combed total of just over £300 million.

Explaining the figures, Roger says he believes sales at auctions have “become a solution for more sellers as other methods fail to deliver the timely results that vendors require,” he says.

Roger also says that the private treaty route has now become a four or five month process, that latest figures suggest that nearly a third of private treat sales are falling through and that, “by contrast, auction is the quick, easy and certain alternative,” he says.

“Results are variable across the country, with stronger success rates evident in the northern half and some buyer reluctance noticeable in the south.

“We see the market coming back into balance, with keener guides and reserves delivering competing bids and healthy hammer prices.”

TPO expels three agents for non-payment of awards to landlords

Zoopla reveals biggest changes to its portal since launch in 2007