Land Registry and Ordnance Survey are to help fledgling businesses with advice and £20,000 startup cash.

Agents wondering where their taxes are spent now have at least one answer – to help proptech businesses get off the ground.

The government has launched its latest bid to stimulate innovation within the proptech industry via a new funding round backed by HM Registry and Ordnance Survey.

Entrepreneurs with ideas or fledgling businesses in need of cash and expertise have until 27th August to bid for funding of up to £20,000 each.

Successful bidders will also be given a Dragon’s Den-style support package including tech, property and mapping expertise plus business and investor mentoring.

Called Geovation, the programme’s ‘hub’ offices in London are used by up to 900 tech firms including many with designs on the property industry.

Geovation also says it has directly funded and supported 72 start-ups which in turn has created 152 jobs and helped the companies raise £17 million in additional funding from investors.

Its most high-profile proptech success so far is GetRentr, which enables landlords  and letting agents to track all UK property licensing regulations and consultations in real-time to ensure property portfolios are compliant.

Since joining Geovation earlier this year GetRentr has raised a further £500,000 from investors and earlier this month signed a distribution partnership deal with ARLA.

“Geovation has been life changing,” says its co-founder and CEO Orla Shields (pictured). “The grant money has helped us do things we couldn’t have done while we were waiting to secure our investment.

”Free office space in [London’s] Clerkenwell is a major benefit for any business – early stage or not. It’s a great environment, with numerous other inspiring start-ups in a similar field.”

Other proptech firms being funded by Geovation include Hipla, a consumer-facing online service that enables buyers to prove their seriousness and financial profile when house hunting and negotiating, a flat sharing platform called Fruumi whose tagline is ‘no more dodgy agents’ and a conveyancing disruptor named ThirdFort. 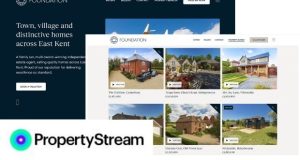