Speech to planners today by Theresa May in London promised to reform national planning system and strong-arm developers into 'doing their duty'.

The Prime Minister Theresa May has delivered her long-promised keynote speech on how she’s going to achieve her government’s ambitious house building targets.

As well as a promised reform of the national system of planning, she also included a strong challenge to builders that her government would only continue to support them via schemes such as Help to Buy if they started building more affordable homes.

She also called for developers to “do their duty” and stop using the viability assessment process to “dodge their obligations”.

These are reviews that builders can request that councils undertake to work out how profitable a development is likely to be, and if necessary reduce the number of affordable homes within a site.

A report by Shelter in November last year revealed that at sites where viability assessment were undertaken, 7% of homes were affordable. Some 28% of property developments are supposed to be affordable, on average.

While speaking against a backdrop of bricks at the Royal Town Planning Institute in London – which some commentators on Twitter were less than kind about (see below) – May revealed a major reform of the National Planning Policy Framework. 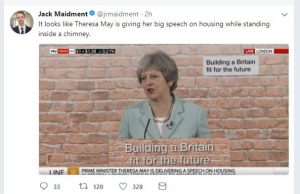 This is designed to release more land to build on by forcing councils to work to minimum targets or face losing some of their planning powers to an inspector.

May’s reforms will also look at land banking and, if necessary, bring in measures to prevent developers sitting on plots.

“The government will make sure land is available for homes and make sure our young people have the skills needed to build them,” she said.

“In return, I expect developers to do their duty for Britain and build the homes our country needs. Public investments in infrastructure and schemes such as Help to Buy have provided a real boost to housebuilders, and if they want that to continue they will have to raise their game.”

Mark Hayward, Chief Executive of NAEA Propertymark (pictured, right), warns that it will take a long time to turn the building industry around.

“Clearly, we need more houses and we welcome these announcements from the Government,” he says.

“However, given the nature of housebuilding we need to recognise that it will inevitably be a slow process before people feel that they have more homes available to them.

“Our monthly housing market report showed demand for housing boomed in January, creating competition among buyers and causing the number of sales to first time buyers (FTBs) to drop. It looks like those trying to get their first foot on the property ladder are in for tough year.”

The Royal Institution of Chartered Surveyors (RICS), was less kind about the planning changes Mrs May is proposing, saying they showed a “fundamental misunderstanding of what’s needed to deliver more homes”.

“The planning changes announced today, under consultation, effectively mark the end of the localism experiment for housebuilding. In threatening to remove planning powers from councils who fail to deliver their target of new homes, the Prime Minister is suggesting local authorities bear at least some responsibility for the housing crisis,” says Lewis Johnston, Parliamentary Affairs Manager at RICS (pictured).

“A variation of this charge has also been squarely levelled at private developers, who are accused of dragging their feet on developing land with planning permission, and are being urged to ‘do their duty to Britain’ or risk losing permissions in the future.

“Whilst we support measures to increase build out rates and push councils to deliver ambitious local plans, we believe the government is still missing the fundamental point about addressing the housing shortage.

“The real reason we no longer build enough homes to meet need is that councils no longer play any significant role in building new homes.

“Ultimately, although this is another step in the right direction to address the supply and affordability issues within the housing market, we are still moving at an extremely slow pace.”

“We welcome measures to speed up the planning system and stimulate all parts of the market,” says Andrew Whitaker, planning director at the House Builders Federation (right).

“The new document presents challenges for both Local Authorities and developers but overall is balanced with the clear intention of planning for more dwellings.

“We look forward to working with Governmental on the detail to ensure the proposed changes lead to a more efficient planning system that delivers more homes.  The industry has delivered big increases in recent years and is committed to working with government to go further and match supply to need.”