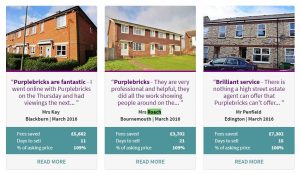 A complaint by West Sussex estate agent Arun Estates to the Advertising Standards Authority (ASA) about nine ‘fees saved’ testimonials still currently featured on the Purplebricks website has been upheld.

The decision goes to the core of the debate around Purplebricks, which many traditional agents believe often compares itself inaccurately with its high street competitors because its ‘fees saved’ claims don’t reflect the different service levels offered by high street and online agents.

The ASA complaint refers to testimonials seen last summer – and still live on the Purplebricks site – in which the company claims its customers have made significant savings by using its services than compared to traditional agents, based on an average fee of 1.8%.

Purplebricks told the ASA that it was “very difficult” to find out what agents charged their clients and that it varied a lot from area to area, but that they had conducted a customer survey among 2,308 respondents instead.

It discovered that the average commission in the UK is 1.5%, to which they added 0.3% VAT, and also told the ASA that other organisations including Citizens Advice Bureau and YourMoney.com pointed to a similar figure.

But the ASA says it was concerned that “the evidence provided by Purplebricks was not adequate to support the basis of the ‘Fees saved’ comparison in the ad”.

The ASA also noted a key difference between Purplebricks and its high street competitors – viewings.

“We considered it was not clear from the ad that the service provided for Purplebricks’ fee was different to that of ‘high street’ estate agents.

The ASA also questioned the survey and in particular whether Purplebricks could add VAT to its survey findings, and that the 1.8% figure was “problematic”.

“In the absence of information in the ad about the basis for the savings claims, including the type of estate agents against which the “Fees Saved” comparison was being made, the differences between the services offered by Purplebricks and the comparator estate agents, and because the evidence was not adequate to support an assumed comparator fee of 1.8% of the sold price of a property, we concluded the “Fees Saved” claims in the ad were misleading to consumers and had not been substantiated,” the ASA says.

A Purplebricks spokesperson said: “We note that the ASA acknowledge that we had not overstated the savings based on the research we and others had conducted into estate agency fees.

“We continue to have constructive correspondence with the ASA and strive to adhere to their requirements, which previously found the 1.8% average commission fee including VAT satisfactory.

“Our research unearthed that establishing a figure for this is complicated by virtue of the lack of transparency on fees from traditional agents, whereas we publish our fees on our website.

“We have since redone the research exercise into average estate agency commissions and shared with the ASA.”