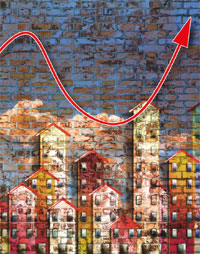 Hometrack: “The annual rate of house price inflation has moderated to +1.9%.”

Average prices across the indices vary from mortgaged-only prices from the Nationwide HPI (Sep 19) of £215,352 through to marketing prices (ie not necessarily sold) from Rightmove (Sep 19) of £304,770 and actual prices from LSL Acadata HPI of £299,596 (Aug 19). Average sold prices from the UK HPI stand at £232,710 (Jul 19). There is a 39% difference between the highest average price from LSL, which include cash sales and the lowest from Nationwide which reflect mortgaged homes.

The best chart from all the reports this month comes from LSL Property Services /Acadata, it clearly shows how house price growth has pretty much disappeared ‘nationally’ since the heady days of 2015 – both in London and further afield. Of course, for many areas this was inevitable after seeing double digit growth following the recession, when prices fell by around 18% then quickly recovered until affordability buffers were hit in London, East Anglia and the South. The best quote from the reports this month is from Hometrack who suggest: “that the recent slowdown represents a return to a more sustainable pace of price growth rather than an impending re-correction in house prices”. The question is, heading to Xmas, will prices dip into the red for everyone – or do the reports suggest that there are signs that things are back ‘on the up’ again. It would be amazing to see a bounce considering the huge amount of uncertainty, but whatever happens, it will depend on an individual property and its postcode!

Having said that, it does depend on when people bought, surprisingly, even in Northern Ireland, money from property could have been made with the average property being worth nearly 40% more than the lows seen in 2009. Wales too is doing well year on year, but inflation long term remains low and overall, property here and in Scotland can be considered ‘good value’ for money. England, mostly led by London is seeing a pretty flat market.

This month you’d be forgiven to get very excited about Northern Ireland’s apparent growth in prices – if it wasn’t for the fact that so many people weren’t still so hurt by the huge losses seen in 2007-09.

Regionally, huge differences still remain with London, despite the recent falls still showing almost double the price growth since 2007. For those investors ‘leaving’ London for more ‘northern’ climes, they need to seriously think if this is the right decision. Population growth, ie demand and indeed wage/price growth north of the Midlands, has been pretty poor since 2007/8 and although investors may ‘save’ on the Stamp Duty, they may not benefit from the tight supply and demand London/ South market, so this may be short sighted and short lived. At the other end of the scale, affordability for those in the Midlands and North and even some in the South since the falls, has improved for many first time buyers – at least from a mortgage lending -v- average wage front. Not something you’d think had happened with the constant ‘it’s impossible to afford a home’ headlines!

RICS: “At the regional level, respondents across London, the South East and East Anglia continue to report an outright decline in prices, while the North East also returned a negative reading this month. Conversely, according to respondents in Scotland, Northern Ireland and Wales, house price inflation remains firm in their localities.”

LSL Acadata HPI: “Wales remains top of the house price league table. The North West has been in second place for three months. The East Midlands has occupied a top four spots for the last twelve months, keeping its third place for the last three months. The North East reached fourth place in July – its highest position in the league table over twelve months. In fifth place we have London, which has climbed back into positive territory from being negative in June. The East of England and the South East remain in negative territory, both having seen falling prices on an annual basis over at least the last five months – this is despite Cambridgeshire and the City of Peterborough achieving new peak average prices in July.”

Hometrack: “Twelve cities have a lower rate of price inflation than a year ago, markedly so in Edinburgh, Bournemouth, Portsmouth and Oxford. Leicester is the fastest growing city with prices rising at +4.8%. This is the first time since 2012 that the fastest growth city has a rate of price inflation below 5%. House price growth is currently lowest in Aberdeen (-4.0%), followed by Oxford (-0.4%) and Portsmouth (0%).

An amazing mix of ‘best performers’ in towns and cities with a spread from Belfast to Leicester, Birmingham, Sheffield and Bradford – so much for the ‘ripple’ effect – clearly not in play here. Nor is the ripple effect working from a low growth perspective, with Milton Keynes over to Oxford, down to Tunbridge Wells and Southampton, with Reading ‘in the middle’ all seeing negative growth according to the Land Registry. London boroughs are seeing vast differences, falls in Newham of nearly 10% through to rises of 9.5% in Camden. Most reports say London is now seeing a recovery.

So we are in a weird position nationally where in London we’ve seen a recession through to 2009, prices then rise in double digits, then slow and fall, now back on the rise. Meanwhile Newcastle saw falls in 2009 of 19% and this has yet to see prices recover. Crazy times, goodness knows what 2020 will bring!

What an incredible mix of views from the reports on transactions. Some say demand and supply is down, others that demand is up, supply tight, sales looking good.

Anecdotally I am being told that for some it’s pretty rough on the stock and demand front, while for other companies, sales are pretty good, with the NAEA in particular saying buyer and sales’ numbers are high. Meanwhile at a postcode level, according to the Advisory, this ‘mixed bag’ is definitely reflected across England with an amazing blend of hot and cold property areas. In the top 10 cold postcodes, nine are in London and the 10th in Liverpool!

From a ‘hot’ market perspective, Sheffield and Bristol appear to be the most popular markets – for now.

NAEA Propertymark: “The number of sales agreed remained high for the fourth consecutive month, at an average of nine per branch.

RICS: “Following a couple of months in which new buyer enquiries increased modestly, August saw a flatter trend in demand at the national level. Indeed, a net balance of just +3% reported a rise over the month, with a reading so close to zero indicative of virtually no change.

“On a UK-wide basis, the Newly Agreed Sales series inched slightly further into negative territory in the latest results (net balance -8% compared to -6% previously). When disaggregated, most areas posted a flat or negative sales trend in August, with the East Midlands and South West regions displaying the weakest momentum over the survey period.

At the other end of the scale, Wales and the North East of England appeared to buck the national trend, as respondents reported a solid increase in activity over the month.”

Bank of England: “Mortgage approvals for house purchase (an indicator for future lending) weakened to 65,500 in August, in contrast to the 18 month high of 67,000 in July. These also remained within the narrow range seen over the past three years.” 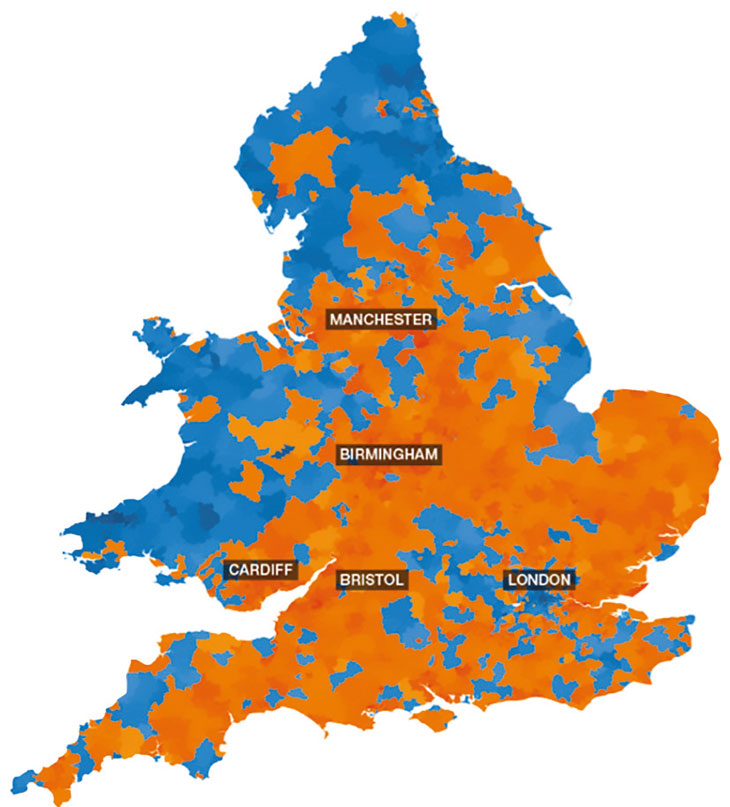