Over two years on, the shockwaves of the Grenfell Tower disaster are being felt throughout the residential property industry, as legal expert, Tim Middleton explains. 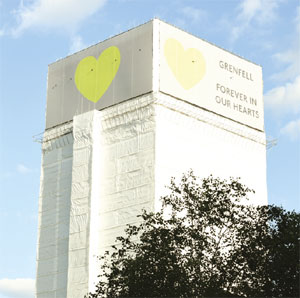 The legacy of the Grenfell tragedy is forcing those looking to sell or buy flats in multi-storey buildings to think again. At present many such flats are virtually unsaleable. Why? It is well known that the cladding wrapped around the exterior walls of Grenfell Tower was highly combustible and contributed significantly to the loss of life that night. And it is believed that many blocks of flats have similar high risk cladding fixed to their exteriors so that they are at risk of a similar conflagration. Identifying those buildings which are at risk and carrying out remedial work to prevent this has therefore become a priority.

Many blocks of flats have similar high risk cladding fixed to their exteriors.

But the cost of replacing cladding on a building’s exterior can run in to hundreds of thousands (even millions) of pounds. In some cases those costs will be borne by a developer or some party who can be held liable for inadequate work carried out on the building. Furthermore, the Government has put £1 billion in to a Building Safety Fund from which grants can be made towards the costs of these works, provided strict criteria are met.

However, in the vast majority of case leaseholders will be forced to split the entire cost between them and pay it through their service charges. This could amount to tens of thousands of pounds each, but the precise amount will not be known until it has been established whether there is a risk at all, what that risk is, the works necessary to address it and what they might cost.

The Government responded to the Grenfell tragedy by requiring that reviews of the external walls of all block of flats were undertaken. Initially this was only for multi-storey or multi occupancy buildings more than 18 metres high, but recent guidance suggests the regime should apply to all such buildings regardless of their height (and this is certainly the stance taken by most mortgage lenders).

A new form EWS1 was introduced which would confirm that a review has been carried out by a “defined competent person” in accordance with strictly defined criteria. Designed to provide a clear ‘safe’ or ‘unsafe’ certificate for such buildings, it has caused more problems because there are far too few persons who can carry out the necessary review to complete this form (less than 300), with thousands of buildings needing a certificate.

By present reckoning it could take months (possibly years) to get an EWS1 certificate and, if it then identifies that the building is unsafe, further time to identify what needs doing and what it will cost. The problem has got so bad that in August 2020 Which revealed that leaseholders were being duped in to paying thousands of pounds to fraudsters issuing fake EWS1 forms.

Clearly if work needs doing to a building to make it safe then it will be very difficult to sell a flat in that building until it has been established what share of the costs the leaseholders must pay. Only then is it possible to agree an appropriate price adjustment (or how much to retain from the price until the final bill is finally established).

However, if a building required (but did not have) an EWS1 certificate, it was proving impossible to sell or mortgage flats within that building until the certificate has been issued. That is because the policy of most mortgage lenders was not to lend on flats until the certificate had been issued and any costs established. Lenders must know that they can sell a secured asset should their borrower not keep up their mortgage payments and the view lenders took was that flats in buildings which required but did not have an EWS1 were not freely saleable.

The Government required that a review of the EWS1 form was undertaken by the Royal Institution of Surveyors (RICS) and, on 21st November, it was announced that an EWS1 form would no longer be required to sell or mortgage a flat in a building without cladding. Funding to train 2000 more building assessors to issue the forms was also announced and a desire to work with the industry to ensure these assessors have suitable professional indemnity insurance.

On the face of it this should immediately benefit nearly 450,000 owners of flats in buildings without cladding and speed up the issue of EWS1 certificates for buildings which do.. Both UK Finance and the Building Societies Association were parties to the agreement reached with the RICS so it is to be hoped this will have eased the previously unworkable position which had been reached.

Nevertheless, the best advice remains to tread carefully and establish in advance if a transaction can realistically proceed before running up costs pursuing it.

Potential sellers and buyers should seek to establish whether the building in which a flat is situated has cladding on it and will therefore require an EWS1 form. If it does and no form has yet been issued then the flat will be extremely difficult to sell or mortgage, if not impossible.

And whilst the Government announcement on 21st November suggests that the way has been cleared for flats in buildings without cladding, one can expect lenders to remain very wary and to continue to instruct their valuers to focus on external wall systems and their compositions (including balconies) and fire safety concerns generally. It will come as no surprise if lenders remain reluctant to lend on flats in some buildings even though they have no cladding and an EWS1 form is therefore no longer required.

Tim Middleton is a Partner in the Real Estate team at BDB Pitmans.