Five roads in mainly student areas of Lincoln that often feature 25% of all homes with boards may soon have them banned. 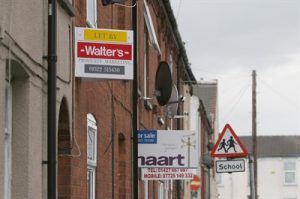 To Let boards in five key student-dominated streets near to Lincoln city centre are to be banned after a survey found that a quarter of all properties featured boards.

Describing them as “eyesores”, the city’s council says it has recently undertaken several consultations with residents in the affected areas and that 85 of the 134 respondents said they favoured a total ban.

The council has now applied to the Secretary of State for the Regulation 7 Direction to be removed for the streets most affected –  Monks Road, the West End, Sincil Bank, Union Road and Waterloo Street – and, if granted the powers, the council says it will ban To Let boards outright.

“It’s shocking to think that some parts of the city have around 25% of the properties covered in To Let Boards, and between the years 2004 and 2016 we have seen the number of complaints grow steadily, so we are aware that there is a problem,” says City of Lincoln Council Planning Manager Kieron Manning (pictured, left).

“Now we have Executive approval, we can carry out the wishes of the majority of residents and apply to have the boards removed.”

Local agents aren’t happy about the move and a spokeswoman from the local Winkworth franchise, Sarah Waldeck (pictured, right), told the BBC that “from an advertising point of view it’s important for us, and it makes people aware of availability. It is fairly close to the city”.

The ban has the backing of students in Lincoln, whose Student Union Vice President of Welfare and Community Connor Delany (pictured, left) recently claimed that To Let boards left outside properties made them a target for thieves.

“If the property has an advertising board outside, it is a big target on the backs of students. I believe the boards tell thieves that the owner is a student, and that they will probably leave the door unlocked,” he said.

“It also tells thieves that the tenants are not going to be in the house during the holidays.”