ZPG CEO's latest punt wants to 'disrupt' the petrol station market in the same way he did among estate agents and film hire companies.

Zoopla founder and ZPG CEO Alex Chesterman (pictured, right) has been revealed as a key investor in an unusual, if not bizarre, new business start-up, which is his 12th to date.

Zebra Fuels offers vehicle owners a new service that enables their car, van, lorry or bus to be filled up while they are parked up. 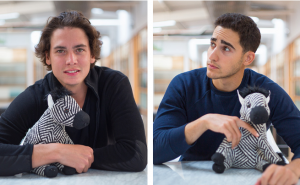 After signing up to the Zebra Fuel app, customers then pick a time and date to have their car filled up and leave their vehicle parked at a specified location with its fuel cap open.

The company, which currently only operates in central London and offers just diesel, is hoping to use the extra cash to expand to a London-wide service and offer both petrol deliveries and electric car charging.

“Our goal is to replace the petrol station and in doing so make filling up your car faster, cheaper, less harmful to the environment, and hassle-free,” Reda Bennis told The Times.

This is not the first time Alex Chesterman has used his considerable wealth from the ZPG floatation and Love Film sale to invest in start-ups.