Sign in or Sign up
The essential site for residential agents
Home » Features » Has print marketing turned its last page?
previous next
Marketing 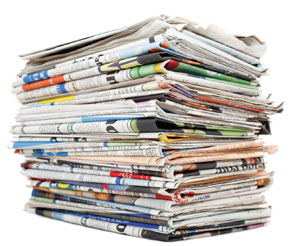 According to a recent Which? survey just six per cent of home buyers find their home in the local newspaper while 43 per cent found theirs on a portal, highlighting the shift away from print marketing to digital among estate agents.

But that’s not to say that print doesn’t have a significant place in the overall marketing mix because, while many agents may have cut down on their print marketing, others continue to invest albeit with slightly different goals than in the past.

Graham Cook, owner and director of the Anerley branch of Proctors, says the function of his agency’s print advertising has changed. “We do the News Shopper advert fortnightly but times have changed – you used to put an ad in and you’d get a call from people waiting for the paper. But because you have to place the ad two weeks in advance sometimes you may have sold the property within that time. We do it now more to keep up our brand awareness.”

We do advertise fortnightly in the News Shopper, but times have changed. We do it more now to keep up our brand awareness. Graham Cook, Proctors.

Sophie Brooks, Marketing Manager at The Negotiator Award winners, Waterfords in Surrey, Hampshire and Berkshire says she doesn’t typically use newspapers to advertise everyday properties for sale, but has recently had success using local outlets to build brand awareness. “We recently ran a successful local newspaper and magazine campaign in Farnham to run a photography competition and advertise the opening of our latest office in the town. This was a huge success to raise brand awareness and connect with local charities as part of our ‘help in the community’ strategy.”

We ran a local media campaign for a photography competition and to advertise the opening of new office. It was a huge success. Sophie Brooks, Waterfords.

It’s particularly effective at reaching those who aren’t as engaged with digital media, say agents, particularly the older demographic. Much has been made of the generational disparity in the UK and it’s largely due to property that those in older age groups are so much better off than those in younger age groups. According to a recent report from Age Partnership, the over-55 age group in England collectively currently own property worth a whopping £1.5 trillion, and this is only likely to increase, so it’s vital that agents are regularly targeting older clients.

The buyer looking for a retirement bungalow is unlikely to be using an iPad, so a property like that is going to work well in a local newspaper. James Britton, Roger Coupe.

As James Britton, partner at Surrey-based agent Roger Coupe, says, “The buyer who is looking for a bungalow or retirement property isn’t going to be using an iPad or looking on the internet, so a property such as this will work well in a paper and can produce a response from a genuine buyer.”

Brooks says Waterfords also keeps demographics in mind when splitting its spend between print and digital marketing. “Digital marketing methods are a good way of promoting properties and services at the lower to mid-end of the market to first time and second time buyers, due to the demographic of the audience. However, for a much higher end property, for example a £1m+ home, the newspaper and local circulars would capture a different demographic and be more effective.”

Of course, it isn’t always buyers agents are looking to capture with their adverts, it’s often sellers they wish to attract with their marketing efforts, and many favour digital marketing because it’s so much easier to gather results on exactly where new leads are coming from, with the results of print much harder to measure in comparison.

IS IT WORTH IT? 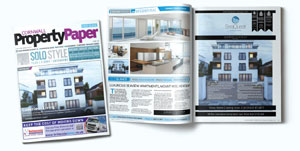 Russell Quirk, Chief Executive of eMoov, says for the online agent it was quite difficult to measure the success of a major national newspaper campaign it invested in earlier this year. “We were front page of The Sunday Times almost every week for about three months and we did see a lift in traffic to the site and enquiries and a big lift in listings actually, but what was really hard to do was get customers to actually acknowledge that they had seen us and responded to us because they had seen those adverts. But we did a survey and only 6-7 per cent of our customers over that period acknowledged even seeing us in The Sunday Times,” he says.

There is an opportunity, sometimes, for print to provide a reprieve from the growing volume of digital output.

“And it was expensive — it was £10,000 an advert, although that was a day’s full exposure to a particular demographic. What we started to realise was that it was pretty evident that PR was getting us a lot more of recognition in terms of leads than those adverts.”

Quirk estimates eMoov regularly gets 200-300 mentions in editorial articles a month thanks to its PR activities, although it’s fair to say a lot of effort goes into achieving this. “If I get a call from the BBC at 9pm on a Sunday night asking if I can be at Broadcasting House at 6am on a Monday I’m there. There are a lot of people who won’t make the sacrifice we do for PR,” says Quirk.

Some agents who have engaged a PR firm may say that a lot of money also goes into that. Many agents fail to see the benefit of investing time, money and effort into PR when results are never guaranteed, professional fees are high and nonprofessional efforts to engage with journalists often fall way short of the mark.

But there’s good reason behind the age-old saying, “advertising is what you pay for, publicity is what you pray for” and there are others in the industry who also strongly believe in the value of dedicating time and resources to securing editorial coverage.

Bianca Jutaru, PR manager of overseas property broker Traino.com, says. “We don’t pay for ads, but we make a big effort to respond to property enquiries sent to us by journalists. The more enquiries we respond to, the bigger the chances of getting published. This doesn’t ensure a regular presence in the national media but we normally get featured two-three times a month. When we get featured in big media outlets such as The Sunday Times, The Telegraph or The Guardian we immediately start getting enquiries about the properties listed. The online version of these outlets brings in the most visitors to our website.

“We also get featured in editorial with various comments and expert advice from our real estate experts. I always encourage our sales department to take time and answer the questions sent to us by journalists as I believe it is good exposure for us.”

For many small agents, their chances of securing, or possibly even benefiting from, editorial coverage in a national newspaper are slim, but more targeted efforts at print advertising can be much more effective. Aaron Perks at Woodblock says that they printed 10 million estate agency flyers in the last year, and they are just as popular as they were five years ago. The simple A5 350gsm double sided flyer remains the favourite choice for agents who, he says, mail up to 100,000 every quarter!  Suzie Pattison, Managing Director at Ravensworth agrees, saying, “We have a large number of clients that use our direct mail platform. They wouldn’t be continuing to use direct mail if they weren’t getting results.” she says.

“We’ve just recently launched a new product that is basically a mini property guide which comes in 8, 12 and 16 pages. It is a little magazine that you can hand deliver though someone’s door with information about the agent, properties on the market and unique selling points. One agent just did their first print run and got one valuation from it so they’ve come back and done a further two.”

Proctors’ Cook says he also sees value in other types of print campaigns. “We do things like calendars or fridge magnets, so they continuously advertise our brand while it is sitting on a desk or on their fridge. It is always there in someone’s property, you can’t just delete it as you can with an email so if someone is thinking about selling sometimes it is quite a good reminder.”

EXTRA BANG FOR YOUR BUCK

Britton agrees that print can have greater longevity than digital media, “With digital media you get a call to action instantly, but if what you’re advertising isn’t relevant at that moment it can get lost. With print media that call to action might stay on their coffee table for a week, two weeks or a month. It’s staying in the consumer’s domain for a longer period.”

Anna Macleod, Marketing Director in KFH’s head office, adds, “There is an opportunity, in some instances, for print to provide a reprieve from the growing volume of digital output.”

Pattison says these views are representative of something of a shift in attitudes towards print marketing of late. “What I am hearing back from a lot of customers is that there is information overload online, so it’s harder to distinguish yourself from the competition. Print is a tangible product, something a client can walk away with,” she says.

In today’s competitive estate agency market, agents need to do everything they can to stay ahead of their rivals and although print marketing might not be the be-all-and-end all it once was, it seems it is definitely still a vital part of the mix.