Sign in or Sign up
The essential site for residential agents
Home » Features » Is Buy to Rent really the future of the rental sector?
previous next
Housing Market

Is Buy to Rent really the future of the rental sector? 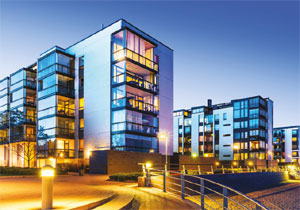 Reports of declining home ownership, particularly among the young, are never far from the headlines. Sky-high house prices, most acutely seen in the south-east, and tougher lending criteria mean that fewer people are able to get on the property ladder, despite government initiatives like Help to Buy. The UK’s imminent departure from the European Union is also putting doubts into the minds of first time buyers due to the increased uncertainty of its impact on inflation, interest rates and economic growth.

Factors like these will invariably push people towards rental accommodation – however the flexibility offered by rental is also proving to be a huge draw. Owning a house remains the aspiration for many, but there is a sea change in the market, with higher numbers preferring the lifestyle of renting. For those in their twenties or thirties it certainly makes it easier to relocate for a new job or move in with a partner if they don’t have to commit to a mortgage.

Most B2R developments have, so far, been large scale apartment blocks, but this is changing.

This growth in demand for rental property has been matched by the rapid expansion of the Private Rental Sector (PRS), now worth around £1.3 trillion and accounts for around 20 per cent of the UK housing market. Rented housing stock delivers a reliable, and relatively stable income even accounting for fluctuations in the economy.

Whilst PRS has traditionally been the preserve of the smaller independent landlord, increasingly the larger institutional investors are looking at the sector, attracted by the stable and predictable yields it can deliver. However, these institutions desire clean and safe housing stock, which has resulted in the newly emerging phenomenon of Build to Rent (B2R).

This year will undoubtedly bring a growth in B2R developments outside of the London bubble, driven by rising land prices in the south-east and a scarcity of opportunities. As the sector becomes more robust and confidence increases, the focus is starting to move away from the capital.

The initial growth of this B2R activity outside of London has been focused on the second-tier cities such as Manchester, Birmingham, and Leeds, as well as those situated along the M4 corridor including Reading and Bristol. The vast majority of these schemes have been large scale apartment buildings within, or on the periphery of, city centres, although there are now a growing number of low rise, family orientated schemes in development.

It is worth noting that institutional investors remain relatively cautious when it comes to developing outside of the core areas, as their knowledge and understanding of these UK property markets remains relatively narrow. As such, developers, agents and local authorities have a huge role to play in promoting new locations.

Given this aversion to risk, local authorities should not be putting unnecessary obstacles in the way of developers and institutional investors. Nottingham City Council, for instance, recently announced plans for a Selective Licensing Scheme that will put a £600 surcharge on each rental property, which will inevitably deter investors.

Of course, all of this should be considered within the context of the government’s recent housing white paper, which recognises the need for good quality housing stock, setting a clear path for local authorities to create more private rental schemes.

While this is a welcome boost to the sector, there is a real danger that the focus will remain on high-density schemes, particularly large apartment tower blocks in city centres, which only cater for a particular segment of the Private Rental Sector.

This seems to be the direction that institutional investors are already taking – after all, it is easier to invest £50million upwards in a single project rather than the same number of houses spread across 10 different sites. The latter requires different planning applications, architect’s drawings and legal fees so it is more risky and costly. Nevertheless, a focus on large-scale developments can result in a lack of diversity in the housing market, and a bias towards city centre flats rather than suburban family homes. The challenge is to tempt investors away from these schemes towards something more imaginative.

The coming years may be characterised by a period of uncertainty, but PRS at least remains buoyant. Desire for rental property, along with a renewed government and local authority focus in the industry, will no doubt see more schemes flourish, but steps must be taken to ensure they match the needs of the tenants.