If it's debate they wanted then the venerable but now French-owned agency has got what it wanted after publishing report on how to save up for a deposit.

Strutt & Parker has prompted a Twitter storm today after releasing a report that suggested Millennial young couples should give up six ‘luxuries’ to save up enough money to get on the property ladder.

The report suggests that young ‘generation renters’ could save up £64,000 within five years by cutting down nights out, takeaways, shop-bought lunchtime sandwiches, the annual city break holiday, lottery tickets and mobile upgrades.

Strutt & Parker’s Head of Research Stephanie McMahon told the Evening Standard that “affordability is a problem for every major city around the world – and in London, it is raising the deposit that is the particular challenge”.

“Getting on the property ladder in London is harder than ever, and with an average deposit of £94,000, people are thinking, ‘What luxuries am I willing to forgo now that will pay off five years down the line?’.” 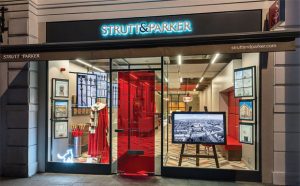 The reception for report was distinctly chilly, particularly among the Millennials targeted in the report by Strutt & Parker, which was bought by BNP Paribas in August.

On Twitter the report was described as “monstrously ill judged” by blogger @Indiablock on Twitter while decidedly non-Millennial Henry Pryor also took to the social media platform to criticise the company sarcastically for “turning up the sensitivity switch”.

But LBC radio presenter Nick Ferrari appeared to support the findings of the report, saying that “it’s not just sandwiches and coffee they need to cut out, it’s the regular spa weekends, stag or hen parties in Las Vegas, £10,000 weddings, two or three foreign holidays a year, top of the range iPhones, expensive tattoos amd all the expensive nights out they have through the year”.

Perhaps predictably, eMoov decided to get in on the action. It has offered the first 300 first time buyers to complete on a property using its service a £5 Starbucks voucher to enable them to buy themselves a sandwich at lunchtime.