London House and Grange London have been founded by pairs of agents with long track records selling upmarket homes.

Two new estate agencies have been launched in London by high profile figures in a single week, reflecting optimism within the capital that its property market is getting back on track as Covid restrictions ease.

London House, a new super-prime agency established by two former Beauchamp Estates directors, has launched in Marylebone while Grange London, a new-build specialist headed up by two industry veterans, has launched in Paddington. London House is the brainchild of Richard Douglas and Alex Bourne (pictured, above) both of whom have long track records selling some of London’s most expensive trophy homes.

The pair spent nearly four years running the Marylebone office of Beauchamp Estates before leaving to set up their own branch nearby. During their time at Beauchamp the duo sold some of London’s most expensive homes including a house in Holland Park for £24 million.

Douglas and Bourne say they are launching with a ‘full array’ of upmarket properties in Marylebone, Belgravia, Mayfair and Holland Park, as well as the wider London area.

“I’ve worked at many different estate agencies throughout my career, however, I’ve always felt that the industry was missing something,” says Douglas.

“For years now the focus has been on quick sales, easy profits and ever-growing margins – but I think it’s time to begin putting strong, personal relationships first.” 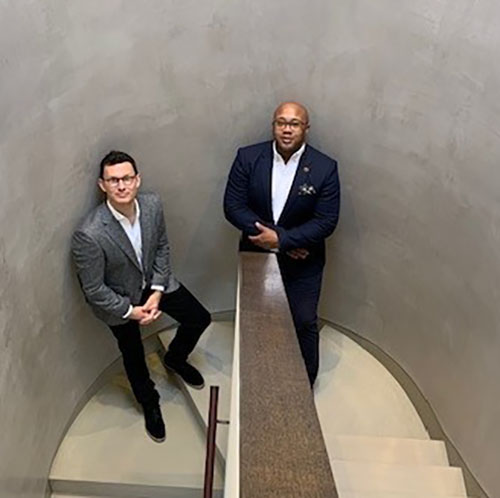 The other agency to launch Grange London, founded by Ben Stroud & Mez Callender (pictured) who are property industry veterans with a combined 34 years of experience including with Hamptons, JLL & European Land.

“We started Grange London because we saw an opportunity within the UK property sector to offer a new hybrid approach where customer service, hard work and attention to detail compliments a desire to adopt technology and embrace different ways of working, ultimately creating a better and more complete offering for the client,” says Callender.