Industry commentators on HMRC's February 2022 figures for property transactions agree on one thing – the boom booms on! 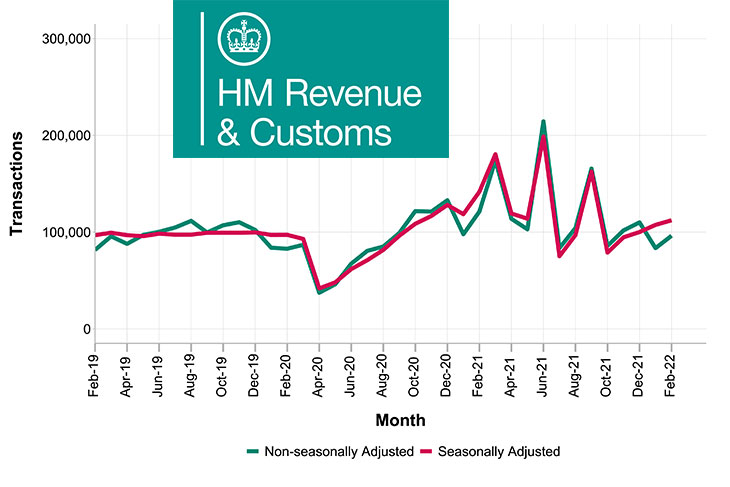 • the non-seasonally adjusted estimate of UK residential transactions in February 2022 has decreased 20.6% compared to last year, but this should be treated with caution as significant forestalling was observed in February 2021 caused by temporarily increased nil rate bands of SDLT, LBTT and LTT

UK residential transactions have gradually increased following substantial coronavirus related decreases during the spring of 2020, including large peaks in March, June, and September 2021.

“While we are still seeing strong momentum in the market, data on agreed sales shows we are also starting to see stratification in sales activity between different price points. TwentyCi records show that sales of properties under £200,000 are still well below where they were pre-pandemic, whereas sales for properties worth £300,000 to £500,000 were 47% higher than their pre-pandemic levels and between £500,000 and £1m the market saw 73% more sales than before Covid. Part of this shift is because there simply aren’t as many homes under £300,000 as before, as we’ve seen values rise over the source of the pandemic

“However, it also reflects a shift in affordability. The Bank of England has already increased the base rate three times in the last six months. With inflation still running hot, mortgage lenders have been pricing in further rate hikes. That limits affordability at the point of purchase, especially for first-time buyers who have less equity backing them.

“The squeeze is felt less acutely by mortgaged home movers, many of whom have built up plenty of equity as their existing home went up in value, and cash buyers, who sidestep the FCA’s affordability checks entirely.

“This will be particularly difficult for first-time buyers who will have been planning to make the most of Help to Buy before the scheme comes to an end next year. As the number of first-time buyers starting chains begins to fall, we would expect transaction activity to peak in the first half of this year and to slow as we head towards autumn.”

Jason Tebb, CEO, OnTheMarket: “With transaction levels picking up in February compared with January, but down compared with February 2021, the housing market is adjusting to a ‘new normal’ and distinct from the pre-pandemic market. It’s an elevated, faster-paced version where a large number of highly motivated buyers are keen to move quickly and eager to compete with other likeminded purchasers for the small number of available properties.

“As the weather starts to feel more Spring-like, more stock is coming to market but not quickly enough to satisfy pent-up demand from buyers who didn’t make their move last year and remain keen to do so. Three consecutive interest rate rises haven’t deterred these buyers who remain determined to take advantage of low mortgage rates while they can. Buyers who aren’t organised and prepared to be decisive risk missing out in this highly competitive market.”

Tomer Aboody, Director, MT Finance: “Even though property prices continue to rise, transaction numbers have also ticked up compared with January as buyers can’t risk hanging around in order to secure their new home for fear of missing out.

“Many buyers are prepared to stretch themselves and pay record prices due to lack of supply, particularly while they can still take advantage of low mortgage rates.

“With global concerns such as Covid and the situation in Ukraine having a direct impact on western economies, Rishi Sunak must use his Spring Statement to look at ways to help curb soaring inflation and manage the rising cost of living.”

Nick Leeming, Chairman, Jackson-Stops: “Whilst today’s year-on-year figures reflect the absence of the Stamp Duty holiday incentive, the significant increase from January this year is indicative of a market driven by intent, as the middle to high end of the market continues to press forward with their desire to move home.

“Of course, supply remains constrained but here we see the first buds of what is a typical flourish of activity in the Spring, with our latest research finding that housing transactions averaged a 28% monthly bounce in March over the last 10 years.

“Across our network, we’re seeing that current pricing levels are tempting some homeowners onto the market. Alongside this, we are seeing older customers reviewing the costs of running their homes in later life and who are keen to unlock value for a secure and stable retirement. Taxation is one of the biggest barriers facing property buyers and further reform would encourage fluidity across the buying lifecycle – greater Government support to encourage this downsizing generation could have a significant impact in terms of increasing supply for families needing more space.”