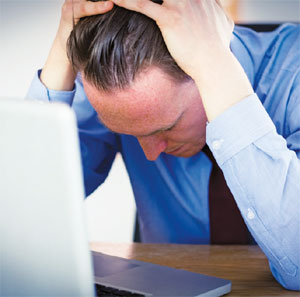 A client recently kept cancelling sessions with me. Normally on he would come, full of the joys of spring – enthusiastic, chatty, raring to go. Indeed, many of the tasks set him would be forwarded back to me before our next session and often completed above and beyond the level I was expecting. In fairness his business was heading clearly in the way he wanted despite the pandemic, so much so I was the one putting the brakes on his plans – too much too soon!

I would prepare diligently, activate Zoom and sit staring at the blank screen waiting for his cheery face to log in. But it did not…. Bearing, in mind how busy everyone is and the unusual circumstances we operate in at present– it is understandable that meetings needed to be rearranged on occasion.

This was the fourth time now we had arranged a time and appointment which he would then cancel or worse still, just not show.

To start with I got the usual apologies and over-showmanship, but afterwards I did not even get a response. It simply stopped. Nothing… What had I done wrong? How had I offended him? His payments were still coming through, he was posting on LinkedIn, Tweeting, Facebooking – all positive messages; so he was about and he was engaging more now than ever before. It made me start questioning my own abilities? I decided to back off, waiting until he got back in touch.

Several days later I then received a missed call, not from (let us call him Dave) but from his Lettings Manager (let us call him Simon) with no voicemail message. I returned the call but got no response.

On a hunch I rang back later that evening just after 9pm and this time he picked up. I apologised for ringing so late and made the usual excuses about being so busy. We spoke for several minutes and he said they were all working hard, and he had just wanted to catch up.

Surprisingly 10 mins later Simon rang back. His wife had overheard our conversation and convinced him to ring back. This time our subject matter was quite different. It turns out – Dave was starting to act slightly erratically with his team. He would range from being over cheerful and buoyant to dour and argumentative in an instant. He was starting to become snappy with the staff and would make decisions only to completely change them hours later or worse still deny having made them in the first place. He had also started spending money – which believe you me was not a trait he was known for…

I thanked Simon for sharing this with me and reached out to a counsellor I know. I explained the circumstances as they had been relayed to me. Surprisingly, Dave’s symptoms are not unusual at the moment and indeed the suffering party may not even realise they are having difficulties or see a change in their own behaviour.

I rang Dave and left a message explaining it was not about of our work, but I really needed his help. He actually rang back! Explaining I had several clients who were finding things really tough at the moment and impressed by his abilities, I was wondered how he was able to carry on as normal and did he have any advice I could pass on. Following a very long silence, he then said just seven words…” The truth is Nathan, I am not coping…” and then the flood gates opened…

It transpires, the pressure of running the business, split bubbling his teams, staff that were not pulling their weight, HR issues, March Stamp Duty worries, future prospects, a relation that died and concern for his own mortality meant he became overwhelmed had nowhere to turn to.

A larger-than-life character that everyone in his company looked to for guidance, support, and direction, he said he felt like a fraud and he did not want anyone to know he was struggling. His Tweets and Facebook messages were one-way communication. Turns out it was not just my call he was ignoring.

We spoke on the phone for over two hours and I was able to convince him to contact a counsellor, which he has now done.

The hero of this story is Simon. It took guts to do what he did and the fear of reprisal if it went wrong was what made everyone else keep their head down and say nothing.

In these troubling times it is easy to assume everyone is okay, but the burdens of responsibility weigh differently upon us all and the most important lesson I learnt from this is we should all be saying it is okay to say you need help. There should be no stigma around it.

As Beattie from BT used to say – it’s good to talk!