Sign in or Sign up
The essential site for residential agents
Home » Features » On Target?
previous next
Products & Services

On 26th January 2015, OnTheMarket.com, a major new UK property portal, finally launched. And the reaction is... 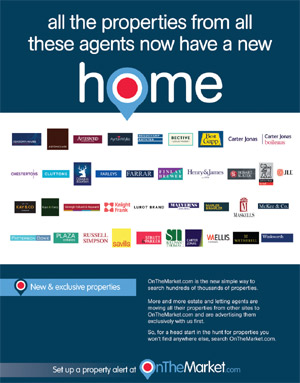 The property industry finally has its first glimpse of the new online property portal, OnTheMarket.com (OTM), has been launched by a group of estate agencies as a direct challenge to the dominance of Rightmove and Zoopla.

More than 18 months in the making, OTM marks the “launch of the beginning, rather than the beginning of the end”, according to Ian Springett, CEO of OTM, who believes that for the first time in a long while “agents have control of their destiny”.

Overwhelmingly positive feedback from agents! Now we are all looking forward to exciting times ahead!” Ian Springett, CEO Agents Mutual

Mr Springett remarked, “There is a lot of anticipation among the member agents – the Twittersphere has gone mad, as there is a realisation that ‘yes’ it [OTM] is finally here!”

With heavyweight backing from some of the highest profile agencies in the UK, OTM, launched with over 250,000 properties, may realise its short term ambition to become the second largest portal in the UK, at the expense of Zoopla, if the number of agents cancelling their subscriptions, in accordance with OTM’s strategy, grows.

Challenging Rightmove, the UK’s largest property portal, with over 10 million visitors carrying out 200 million searches every month across more than 1 million properties, will be a much greater challenge. 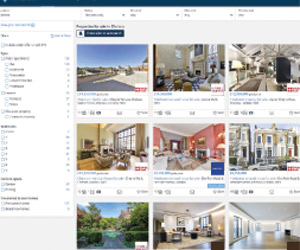 However, by preventing their member agents’ from listing homes on both Rightmove and Zoopla, OTM is arguably restricting consumer choice and the potential market reach of those vendors and landlords trying to find buyers or tenants for their properties.

The main concern is that homeowners who want to sell their properties could miss out on potential buyers, as increasing numbers of estate agents stop listing homes on either Rightmove or Zoopla, which between them get 100 million hits a month. After all, marketing a property as widely as possible is crucial to achieving the best price.

OTM has been set up by a consortium of big-name estate agencies in an attempt to break the ‘duopoly’ of the two big property portals, which they are entitled to do. But people do trust Rightmove and Zoopla to simply have all the properties available on the market, as many people – those outside the property industry – assume that agents list on both websites, and so they may not have noticed that the amount of housing stock in their area has been reduced.

Here at The Negotiator we wish OnTheMarket.com, a website driven by agents’ simple desire to offer vendors’ homes on a clean, consistent and efficient site with no third party advertising, the success it deserves. But we would also like to see the OTM venture show more consideration to the consumer too. While the website is consumer-friendly in terms of navigation, it fails to offer the range of crucial information that Rightmove and Zoopla have.

Length of time on the market, portal listing date, past price reductions – these are all important bargaining tools from a buyer or tenant’s perspective. Failure to offer this sort of relevant information – in the spirit of transparency – may simply deter many users from using OTM, resulting in poor web traffic and a low level of leads. Time will tell how important this really is and whether OTM will introduce these bells and whistles – or some new ones of their own!

For the national press, OTM’s launch provided a great new story for a quiet January, but reading the articles, and reading response comments online, you have to wonder if the public actually understands what the portals are – a market place for estate agents to advertise properties and for consumers to find properties that they would like to view.

Numerous articles before the launch of OTM describe Rightmove and Zoopla as estate agents and even with the big element of the OTM story being that it is actually owned by estate agency firms, the man on the Clapham omnibus still thinks that the portal is ‘an estate agent’.

“I’m glad to see there are more options than just estate agents. I’m based in Clapham and I used a peer-to-peer property market place www.bestreetsmart.co.uk. It is free to list, and doesn’t charge commission fees.” So does Winston think OTM is an online agent?

And other readers were negative too. Responding to an article in The Guardian, ‘Caracas Trepid’wrote, “OnTheMarket? Sounds like a cabal to me. Isn’t this type of thing wrong, anti-competitive, illegal? Don’t like the idea of this – if it works they’ll control the market and then see what happens to your fees.”

‘Captain Grey’ replied, “It is indeed a cabal. The estate agents are concerned that the websites are doing all the work and they are not needed (they are entirely correct in this), so they are setting up their own website that only bricks and mortar estate agents can use.”

The launch of OTM could, in fact, have a negative effect on the future of traditional estate agency, highlighting to the UK consumer that agents want to spend less on their advertising but not making any comment on reducing their fees with that saving, as many readers have noted including Nick Stuart writing on The Times online news: “When you have the CEO of Home Owners Alliance openly saying it is to protect estate agent profits you know that this is the act of a desperate group of profiteers.”

“From an agent’s point of view, the (OnTheMarket) website defends our position against the profit-driven portal duopoly whose interests are increasingly at odds with our own goals,” said Jake Russell, Director at Russell Simpson.

The new portal, solely owned by the agents that list on the website, with close to 5,000 estate agency offices already signed up, has had a dramatic early impact on the market with its ‘one other portal’ rule requiring their member agents to stop advertising on either Rightmove or Zoopla.

But what do property professionals actually think of the new website, including its look, usability and layout?

“The website looks simple and effective and I’m looking forward to it becoming the first stop for all landlords and tenants,” said Steve Cook, Lettings Manager, Henry & James.

OnTheMarket is easy to use and the red, white and blue pointer will become memorable in a very short time. James Bailey, CEO, Henry & James

James Bailey, also of Henry & James, has found the website “easy to use”, and believes that OnTheMarket’s red white and blue pointer, “will become memorable in a short space of time.”

Also finding the new website to be “very clear and user friendly”, Carol Peett, Managing Director, West Wales Property Finders, who commented, “The format is far cleaner and quicker to load than Zoopla and the layout makes searching for suitable properties easier and quicker than either Zoopla or Rightmove. I think it will be a great success as, once agents who have not yet subscribed realise its advantages, more and more will join.”

OnTheMarket was deemed to be “thoroughly British” by James Wyatt, Partner of Barton Wyatt thanks to its “great colours.”

“The site is incredibly quick and very easy to navigate – I am delighted with it,” he added.

The new portal “certainly has appeal” according to Jonathan Hopper of Garrington Property Finders.

“It is user friendly and the images are much larger than those of the two competitor sites – Zoopla and Rightmove,” he said. “It has a clean, uncluttered feel and is not littered with distracting adverts. The colours used add sophistication and are more in keeping with the contemporary developed websites we are becoming used to.”

Adam Hesse from Aston Mead, accepted that the new OnTheMarket website may not be as “slick as Rightmove” but pointed out that has “taken years to get right.”

“We wanted something very simple and easy to use which is what we have (in the new OnTheMarket website),” he said. “It will become polished as it receives feedback from agent members. I think consumers will like the simplicity of it.”

Trevor Abrahmsohn of Glentree International, agreed, “As a founder of OnTheMarket.com I can say with some authority that the site is the most up to date, visually attractive of all the portals offering the freshest properties with the most pleasurable experience.”

OTM’s short term ambition is to become the No 2 portal after Rightmove. Zoopla won’t give in easily!

Adam Day, Managing Director of online estate agent Hatched.co.uk, who recently resigned from the National Association of Estate Agents (NAEA), in protest to its continued backing of OnTheMarket, which is refusing to list online estate agents, said that the new website fails to stand out from the competition.

“OnTheMarket does appear to be very similar visually to its key competitors Rightmove and Zoopla,” he said. “There is nothing there to say to buyers ‘come back’ and no hook to get buyers to change their searching habits from those big players that have been ingrained within the public’s brain for years now.”

He continued, “It’s understandable that agents want to market their clients’ properties without information relating to price reductions and length of time on the market, as do I for my clients. However, in reality we are dictated to by the buyers who will go where the most full version of the information can be found.There is a plethora of extra information on Rightmove and Zoopla relating to historic prices and more.”

Ian Springett, CEO of OnTheMarket, said that he was delighted with the “overwhelmingly positive” feedback from agents about Britain’s new major property portal.

“We are seeing record expressions of interest from agents who are now considering coming on board,” he said. “We are all looking forward to exciting times ahead.”