TPO pushes back against government plans for whole-sector ombudsman

Today's annual report from The Property Ombudsman says it believes separate redress schemes for both private and social sectors are best way forward.

The Property Ombudsman disagrees with the government’s position that the housing sector should be policed by a single ombudsman, suggesting instead that the role is divided into two between its social and private halves.

The comments are made in TPO’s annual report published today in which Ombudsman Katrine Sporle (pictured above, left, with Chair Diana Warwick) says: “We believe that there should be only one Ombudsman per sector [which would be] better placed to set best practice, raise standards in the industry and clarify the position of consumers.

“We cannot see an Ombudsman being effective for the whole of the private and social sector.”

This will hold sway in Whitehall – TPO is the largest property ombudsman by a long chalk and now claims to have more than 95% of sales and 85% of letting agents in the UK signed up.

And it is only one of two services left following the withdrawal of Ombudsman Services: Property in February. 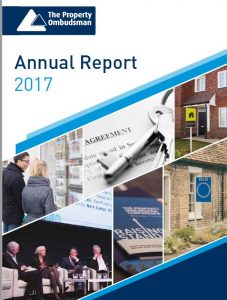 TPO’s report also reveals that the number of complaints about letting agents from landlords and tenants soared during 2017, rising by 11%, while the number of sales agent complaints plummeted by 16%.

This reflects the seismic shifts taking place in the property market as more and more people rent rather than own.

The Ombudsman also recently signed up to use chatbot service Yomdel on its website, which helped dramatically increase the number of consumers contacting it, rising by 68% during 2017, while overall the number of complaints dealt with by TPO increased by 3%.