Agent review sites have become part and parcel of the agency business. You can live by them and die by them, says Andrea Kirkby. But what can you do about them? 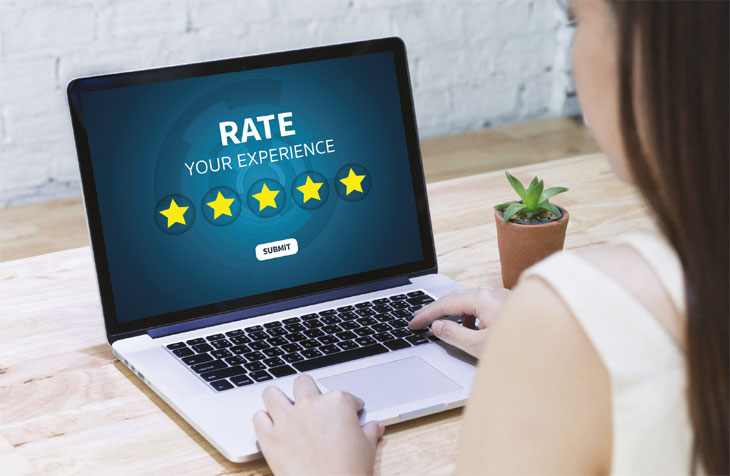 Your public profile couldn’t be more important in the digital age. A potential vendor Googles you,

Google shows a negative review at the top of the search results – you’ve lost the deal. You already know this, but knowing what you can do about it is not so easy. Even if it were, there’s so much involved these days – from search engines to social media – that no agent has time to do it all themselves.

Besides which, estate agency is a sector with a bit of an image problem, anyway. A survey by CV-Library shows estate agents come seventh on the list of ‘least trusted’ professionals – mind you, that’s a long, long way behind politicians, who top the list!

Another way of looking at the question is to consider the reputation scores of different sectors at Reputation.com – albeit these are for the USA. Real estate companies score between 211 and 634 out of 1,000; the company advises that only “when a score inches above 600” can a company claim it’s beginning to do things right. The score spread suggests most realtors come in well below that level.

Most consumers look at online reviews before they choose an agent. BrightLocal’s annual survey showed that 86 per cent of consumers read reviews while searching for local businesses. 57 per cent won’t consider you unless you have a four- or five-star rating. That’s a big hurdle to jump.

But review sites are many and diverse. AllAgents claims to be “the UK’s largest customer review website for the property industry,” but there’s also View Agents and Getagent, the latter not review focused but offering a search based on quantitative data such as the number of properties on offer and sold, time to sell, and percentage of asking price achieved.

Besides sector-specific sites, there are also generalist review services, such as Trustpilot. (By the way, Getagent asks agents signed up to its service to review it on Trustpilot, where it has a 73 per cent ‘excellent’ and 20 per cent ‘good’ rating.)

And then there’s Google. It’s almost impossible for a user to avoid Google reviews. Simon Leigh of PureReputation says, “Google Reviews is massive; it sits at the top in a box. You can’t ignore it.”

Besides which, of course, testimonials can also be placed on an agent’s own website. Ben Marley, Head of Market Development at Feefo, points out that a high percentage of vendors, when they’re deciding between two or three agents, will visit those agents’ websites directly as part of their research. So it’s important that agents solicit testimonials and highlight them on their site – a job that Feefo’s review software can help them with.

Ask nicely – this is important

Soliciting reviews is important. If you wait for customers to leave reviews of their own free will, you’ll only get two kinds – really happy five-star reviews, and totally disgruntled one-stars. To get a better balance, agents need to proactively invite their customers to review them. Ben Marley says, “The people in the middle are the feedback that we help to collect, to get a better range of feedback, not just one-star and five-star.”

He also believes it’s important to get feedback at different stages of the process, not just on completion. For instance, was it easy to make contact? Did the agent respond to requests quickly?

“Many agents are very keen to understand the voice of the lost customer,” he explains. Asking for feedback on early stages of the process can help explain why customers hired another agent. “It’s better that you get the data in real time,” he says, “because it’s much more accurate.”

Ben also believes many businesses that ask for feedback don’t ask the right questions. You can’t just ask “are you happy?”, you need to drill into the customer experience with specific questions that elicit the responses you need. “We pride ourselves on being industry experts and knowing the right questions to ask,” he says, “and that will depend on what your goals are.”

The testimonial isn’t just a marketing device. It’s also a useful piece of feedback that can be used to improve operations. For instance, AllAgents enables branches to identify individual staff, so that feedback can be integrated into training needs analysis.

That can be taken further. Belvoir, for instance, uses Reputation.com scores as one of the KPIs for their branches. If a branch has negative trends, then questions need to be asked about why that’s the case. (After all, it’s possible for an office to be highly successful in financial terms, but without leaving any of its current customers feeling particularly happy – something that will come back to bite it in due course.) Belvoir even awards an Online Reputation prize to one of its franchises every year, won by its Devizes office this time round.

Belvoir, for instance, uses Reputation.com scores as a KPI for their agencies. After all, it’s possible for an office to be highly successful in financial terms… but without leaving customers feeling particularly happy.

Reputation.com doesn’t just look at reviews, but analyses social media engagement, too. Its complex mix of services uses data analysis to give feedback, for instance generating wordclouds which show customers’ top concerns. (‘Efficient’ might be good, but not if it’s twinned with ‘pushy’.) It can pinpoint issues that might just be emerging, as well as analysing customer sentiment and benchmarking against competitors’ scores. That’s all useful information when you’re looking at how to improve your operations and your reputation.

However, online reputation management isn’t just about reviews. It can also involve managing content on social media, news articles on the web, and other content. To do it properly, says Simon Leigh of London based Online Reputation Management Agency, you need a sophisticated cocktail of different methods; there is no single magic bullet. And while you might start by wanting to suppress negative information, such as fake negative reviews, or information about a rogue branch that you’ve now closed, that campaign will probably also need to include creating and promoting positive content too.

First of all, he says, “You need to understand how search engines work.” For instance, Google’s recency bias can help you turn your brand around. But you can also help to destroy the authority and ranking of a particular webpage by editing its content.

Google also gives a “right to be forgotten”, which Simon is experienced at using. “A lot of it depends on Google’s discretion,” he says. “They don’t like letters from lawyers – you’re better off trying to get them on side.” On AllAgents, you may be able to get a moderator to block a malicious review; and on Trustpilot, he points out, “If you report a review, it gets blurred out during the removal process”.

He also advises using the letter of the law to protect your interests. For instance, if a real customer leaves a review, but has opened a fake account to do so, you can get the review removed, even if everything in it (apart from the account name) is true. “That’s really easy to remove,” he says.

But he points out that sometimes, taking action can make things worse. Agents often reply to bad reviews, justifying themselves or apologising; “But,” he warns, “If the reviewer is a troll, you’re giving them exactly what they want, and keeping the bad vibe going. Instead of replying, if a customer’s really unhappy, just give them their money back.”

One of the good things about using an online review service is that testimonials create excellent user-generated content that will improve your visibility in search results. For instance, once Wirral agent Karl Tatler started using Feefo and putting reviews on its site, it got markedly higher visibility in Google Search – leading to a 72 per cent increase in inquiries.

Could you do this yourself? Yes, though it would be a stretch for most agents. Remember though, the effort needs to be continuous. “The mistake many agents make is they go through short spells of activity, and then they leave it,” says Ben Marley. If your last good review dates from 2017, prospective customers may be less than impressed – and Google certainly won’t rate your site highly.

The big change from the early days of the review sites is that the internet has become a much more complex place. Agents need to showcase testimonials on their own sites and on social media, as well as keeping an eye on Google and other review sites, on what’s said about them on Facebook, and on all the news articles about them as well. That’s a heck of a job and a good reason that increasing numbers of agencies are now asking a professional outfit to do it on their behalf.